Theatre Review: I Know All The Secrets In My World at Bristol Old Vic Studio 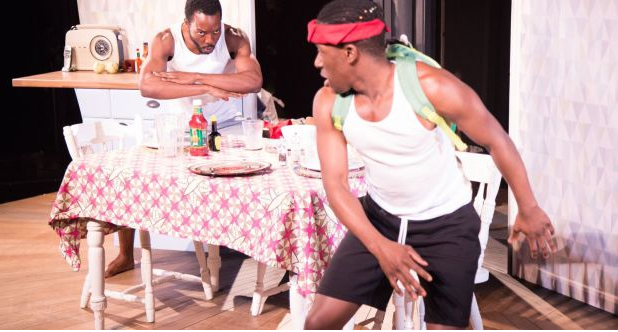 There’s much to admire in Tiata Fahdozi’s I Know All The Secrets In My World, produced in association with Watford Palace Theatre. With barely any words, instead encompassing physical movement and an eloquent aural vocabulary of domestic sounds, the play explores what happens when a father and son’s world falls apart.

Solomon Israel and Samuel Nicholas are the father and son initially united in the joy of everyday; playing on their games console and turning the clearing of the kitchen table into an elaborate masque. In Helen Skiera’s audacious sound design, their wife and mother is only heard; never seen. Then the unthinkable happens and the pair must come to terms with her loss. They become shadows backlit in a dry-iced, fragmented darkness; attending her funeral, putting life on hold, before trying to get back to the familiar motions of a routine with its heart ripped out.

As a piece of theatre, I Know… is immediately immersive and affecting; an exploration of grief as an embodied and somatic experience, with shades of Gecko and Frantic Assembly. Each word spoken is carefully weighted. Father and son’s movement becomes a fractured duet, frequently discordant in their differing, day-to-day interpretation of sorrow. The son is still looking for opportunities to play despite his sadness while the father shuts out the wider world but still finds the familiar interior fills him with despair.

Having brought its audience to this devastating understanding, however, this is the point where I Know…fails to move on, instead dwelling within the grief it has already documented. Of course, there are different stages of mourning that the pair must move through, yet the play becomes too intent on hammering home the same note; the dead wife’s clothes so heavy with meaning, each kitchen object she has touched imbued with her absence. Eventually, a production of only 60 minutes’ duration slides into becoming over-long.

Despite the eventual renewal of hope through the strength of the father-son bond, this play feels incomplete, as though perhaps it should be condensed into a fragment of something bigger. Nevertheless, it must still be commended as a beautiful meditation on grief in its own right, a piece that is saturated with ideas worthy of further exploration.

Posted by Claire Thinking at 12:44

Email ThisBlogThis!Share to TwitterShare to FacebookShare to Pinterest
Labels: Bristol Old Vic, I Know All The Secrets In My World, Tiata Fahdozi