Eli Goldstone's Strange Heart Beating has one of those singular covers that never fails to draw comment, even though reactions in my small sample veered between captivated and unconvinced. Maybe its contents will prove equally divisive, but I for one adored this striking debut novel from a bewitching and deceptively complex young voice. 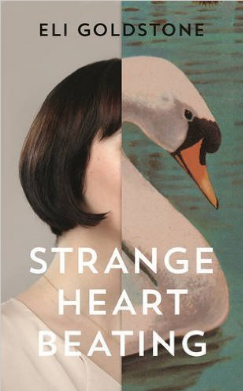 Leda Kauss has perished in a bizarre North London boating accident involving a swan. From the outset, her death has an air of inevitability. Women in her family frequently die young in unusual circumstances; freezing to death in the 'javelin of a pine tree's shadow' or from the sepsis caused by the shard of a fallen chandelier.

Leda's husband Seb, the story's narrator, is undone. Robbed of a future with his beautiful, sophisticated artist wife and struggling to cope at work, he lashes out at those around him. He is alternately arrogant and apathetic, driven to extremes by his grief. Sunk in a morass of memory, he begins to research Leda's Latvian childhood:


I've taken it upon myself to learn more about her. Even in death, why shouldn't I get to know my own wife? I'm unlikely to find a woman to interest me more. I take a trip to the library. It's the first time I've set foot in the place, even though I signed a petition to save it.

Sifting through her belongings, he comes across photographs of people he doesn't know and a packet of unopened letters from Olaf, a man Leda never mentioned. He decides to travel to Latvia, to find out more about the enigmatic woman he married.

This is a book of layers to become immersed in, tumbling away from the sharp edges of reality down the rabbit hole of Leda's origins. The title is taken from W B Yeats' poem and references to the classical mythology of Leda and the Swan, are threaded through the narrative, although - as Seb discovers - it is his wife's identity that appears to have changed its shape.

Seb's narrative is interspersed with extracts from Leda's adolescent diary; meeting those she grew up with, he becomes increasingly unsettled by what he didn't know, finding more fresh questions than answers. At the same time, he is absorbed by Leda's forested homeland, so different from his own intellectual life in London. Finding Olaf, he is gradually drawn into the sinister and near-feral tensions of an exclusively male circle of hunting friends.

Strange Heart Beating is distinctive in its imagery, filled with the bitterness and melancholy of lost love, darkly witty and immersive from the first page. Eli Goldstone, a graduate of the City University Creative Writing MA, has produced a remarkable debut. She anatomizes grief from the inside out, stripping it back to the sinew, hinting at the magical realism of Angela Carter's writing but establishing a penetrating and fearless style that is firmly her own.


Strange Heart Beating is published by Granta Books on 4 May 2017. Many thanks to the publishers for my review copy.
Posted by Claire Thinking at 07:58