This review was first written for The Reviews Hub 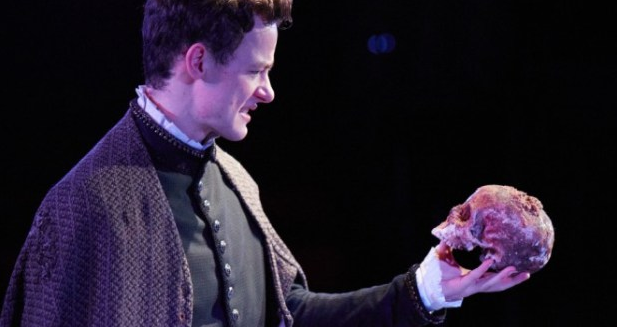 Approaching the 400th anniversary of Shakespeare’s death, it seems that one of his most famous tragedies is being staged now more than ever. Benedict Cumberbatch’s high profile Hamlet attracted a legion of his fans to the Barbican last year, while Paapa Essiedu – who previously played Romeo at the Tobacco Factory – is soon to take the title role at the RSC.

In Bristol, directing for Shakespeare at the Tobacco Factory (SATTF)’s new season, in tandem with All’s Well That Ends Well, Andrew Hilton has created something of an enigma at the centre of his Hamlet by casting Alan Mahon, a 23-year-old Irish actor in his English debut, as the Danish Prince.

Taking a star out of the equation refocuses attention back on the play itself; Hilton’s version of Hamlet’s attempts to avenge his father’s death at the hands of the King’s own brother is certainly played out with all his trademark clarity. Shakespeare’s words are exquisitely measured by the SATTF ensemble; each line given weight but delivered as though it has just occurred to them, rather than being some of the finest prose ever written in the English language.

In this, Isabella Marshall stands out as a wonderfully haunting Ophelia. At the beginning cool and collected, her descent into insanity after the death of Polonius (an effectively bumbling Ian Barritt) – the crazed singing and handing out of imaginary flowers – may be widely anticipated by those knowing the plot, but is nevertheless shocking to witness.

Yet any production of Hamlet will ultimately depend on its central character and, from a slightly uncertain start, Mahon turns in a solid performance that grows in stature as the play unfolds. A patently young Prince, he has the energy necessary to propel the action forwards without necessarily encompassing all the subtleties and gravitas of Hamlet’s most famous musings on mortality. His Hamlet is more angry than unhinged enough to convince the court of his madness, but his essential likeability sustains the audience’s sympathy throughout and promises much for the future.

Max Johns’ set is no-nonsense, grey and austere; a few wooden benches and thrones, a carpet runner and some sconces setting the tone for a production that involves but doesn’t necessarily excite. For all its clarity, this version lacks a sense of inventiveness in some of Hamlet’s traditionally most entertaining scenes. The play within a play appears rushed and the gravediggers are reduced to a solitary, although salaciously amusing, Sexton in the form of Nicky Goldie. The initial appearance of the ghost (Christopher Bianchi) fails to produce any real chill, although his subsequent return is much more atmospheric.

It falls to the final fight between Hamlet and Laertes (Callum McIntyre) to introduce a note of exhilaration; the moves are taken from authentic fencing principles of Shakespeare’s era and create a dynamic and thrilling climax to the play. All in all, this is a credible, firmly grounded and enjoyable Hamlet that tells its story well yet waits until the end to really catch light.

Posted by Claire Thinking at 20:15