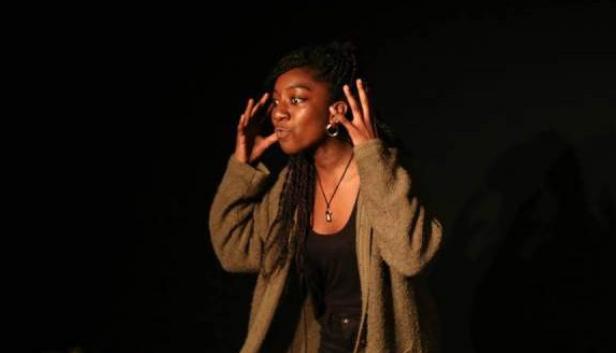 In Check The Label, Eno Mfon combines her own personal experience with film and audio projection to question the everyday extremes endured by black women in conforming with society’s ideals of their beauty.

It’s a clear, engaging performance from young Mfon, currently still a student of English and Drama at the University of Bristol. From a childhood defined by playground chants and skipping songs, she tells how she became aware, through the influence of her older sister, that her hair in its natural state was deemed unattractive and needed to be ‘relaxed’; a process anything but relaxing that painfully burnt into her skin.

The playground songs become fractured and disjointed; bullied at school, she overhears her brother and his friends rating girls on their attractiveness. Darkness equates to dirtiness and being burnt by God and she understands her skin needs to be bleached to a lighter tone – a message reinforced by endless music videos defining prettiness in young women as straight-haired and caramel-coloured.

Here, Mfon directly confronts these prejudices in her own words – part poetry, part testimony – and recordings from daytime TV of black girls and women describing how their hair and colour makes them feel and the lengths they go to in changing them. Yet, this is a process that distances women from each other, opening up those with darker skin to the judgement of their lighter sisters.

Mfon is a natural on the stage. She smiles, skips and confidently brings her audience along with her, as she single-handedly reveals the toxicity of this quest for notional beauty; reciting a list of chemicals you would hesitate to clean your bathroom with from the labels of hair relaxant and skin lightener bottles – ingredients that will irritate and maim.

Deftly directed by Tanuja Amarasuriya, in a work first showcased as part of Bristol Old Vic’s Ferment Fortnight, Check The Label is a powerful challenge to assumed norms; it reveals Mfon as a writer and performer of considerable talent and one to watch in the future.

Posted by Claire Thinking at 12:30