I'd been meaning to read Claire Fuller's debut novel Our Endless Numbered Days for a while, but was galvanised into action when it was chosen as the Big Read for the Bath Literature Festival recently. As one of the stewards for Claire's author event in the Guildhall (grappling with the idiosyncrasies of the two-way radio, but that's another story...), I wanted to be able to follow the discussion of this 2015 Desmond Elliott Prize-winning book. 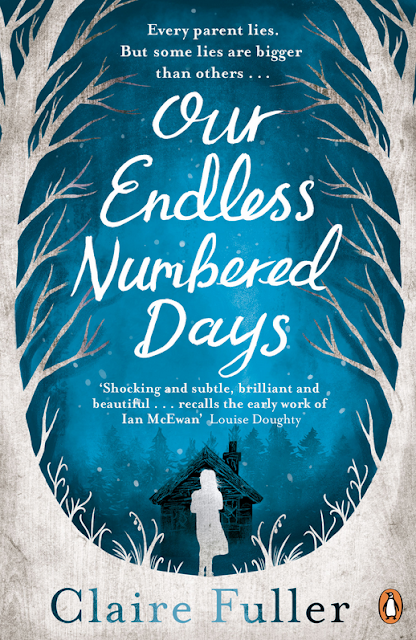 In the hot, sticky summer of 1976, eight-year-old Peggy is taken by her father, James, to live in die Hütte - an isolated cabin in a remote German forest. Here, he tells her the worst fears of the Cold War years have been realised and the rest of the world has been destroyed. Everything familiar in her childhood so far - her mother, Ute, and her London home - has been swept away. From now on, the pair must survive on their own, dependent on what they can scavenge from their surroundings and what little they've carried with them.

Peggy - renamed Punzel, as if in a Brothers Grimm fairytale - and James set about making a life for themselves, repairing the cabin and exploring their new terrain. That first summer, they have plenty; enjoying a diet of mushrooms, leaves and roots, fish, rabbit and squirrel, with time taking on a new dimension:


Each morning since we had arrived, my father had cut notches into die Hütte's door frame, but when he got to sixteen he decided to stop.

'We're not going to live by somebody else's rules of hours and minutes any more,' he said. 'When to get up, when to go to church, when to go to work.'

I couldn't remember my father ever going to church, or even to work.

'Dates only make us aware of how numbered our days are, how much closer to death we are for each one we cross off. From now on, Punzel, we're going to live by the sun and the seasons.' He picked me up and spun me round, laughing. 'Our days will be endless.'

Yet, with winter approaching, it becomes harder to find food and even her father's optimism is tested. And, as Peggy realises there's no going home, she faces many devastating challenges in her years of isolation in the wilderness. Putting away her one doll, Phyllis, who also voices her childish feelings, she grows into adolescence with a father who seems increasingly delusional. At the mercy of the elements, lacking in emotional and physical essentials, Peggy finds it more and more difficult to retain her own uncertain grip on reality.

The novel first opens in 1985, as Peggy is trying to settle into life back home with her mother and younger brother almost a decade later. So, we immediately know two things; that James is lying to her all along about the world's end and that she will come through her ordeal alive - if not exactly unscathed, either mentally or physically. What we are hungry to find out is how - and what has happened to her father.

The structure of the two timeframes twists and intersects to a riveting and psychologically shocking conclusion - one with consequences that aren't immediately obvious and only become clear at the very end of the novel. I found myself wanting to know more; what will happen to Peggy next and how will she cope? For me, the 1985 timeline was underwritten and I was always eager to get back there, feeling impatient on occasion with the descriptive elements of Peggy's years in the forest; the catching of squirrels,foraging for food and increasing dissonance between reality and illusion.

Having said this, Fuller's depiction of the summer of 1976 vividly conjures up that heatwave we thought would never end, the low thrumming of the ever-present existential threat of nuclear holocaust and the post-apocalyptic life depicted in the 1975 TV series Survivors (which I somehow managed to pursuade my parents I was old enough to watch).

There's also considerable complexity in her portrayal of family relationships; skilfully exploring how far a child can be led into accepting the word of a parent despite the evidence of their eyes, and how easy it can be to recast reality into anything you want to make it. The importance of music threads through Peggy's existence; distancing Ute as a concert pianist who never takes the time to teach her daughter the piano and contrasting this with the poignant playing of Liszt's La Campanella in the forest on a roughly constructed keyboard incapable of making any sound. 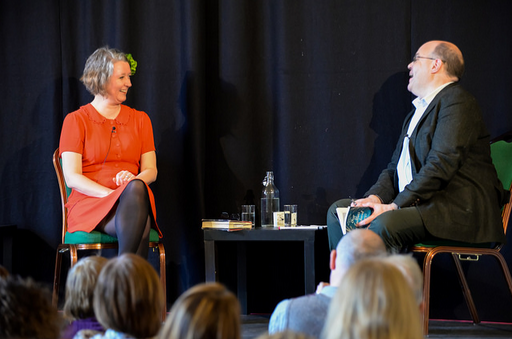 That Fuller mines so many stimulating themes makes Our Endless Numbered Days a perfect book group choice. Indeed, Bath's Big Read event was full of illuminating and enjoyable discussion between Claire, her interviewer Mark Lawson and a well-informed audience. My only quibble is that we were asked not to discuss the ending for fear of spoiling it for those who hadn't read it yet. As the audience seemed full of book groups who knew the novel and were particularly eager to talk about its controversial conclusion, this did seem an unnecessary constraint on a free and full discussion.

Posted by Claire Thinking at 16:40