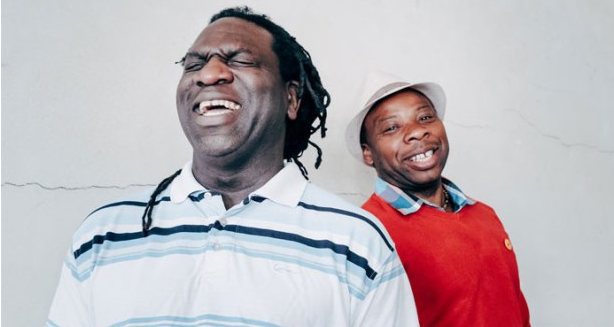 There’s a natural warmth and chemistry between Miles Chambers and Edson Burton that’s evident from the beginning of Curried Goat and Fishfingers.

Part poetry, part conversation between friends, this hour-long reflection on the lives and experiences of these two Bristol poets and performers encompasses their relationship and all it means to be Black and British.

From early childhood, they have both always written; Miles in his bedroom, Edson – one of a West Indian family of eight kids where privacy was non-existent – at school. With the use of music and a projected backdrop, they explore their early stories and differing experiences from attending church to visiting Jamaica for the first time.

Their love for Bristol, the vibrant multi-cultural city both call home, comes through loud and clear, as does their anger at its roots in the slave trade and the prejudice encountered by their parents’ generation. The tone changes from light-hearted, with a translation of Jamaican patois into Queen’s English, to poignant tales of love and loss and fast-paced verbal explosions at the treatment of newly arrived immigrants in the 1960s: the colour bar on working on the buses and advertisements for accommodation that stated ‘No dogs, No Blacks, No Irish’.

Presented as a series of loose vignettes, just when you feel that the performance might be sliding out of focus, it snaps back in again with organic energy and wit – as the pair collide on the dance floor, they lament how they’ve ‘got to get the dance right or no one will say we’re black’. Today, they see fusion everywhere in Bristol: in food, music, people and ideas.

Combined with Pink Mist still playing in the main house, there is a real emphasis on the unique culture of the city that Bristol Old Vic has called home now for 250 years. It may lack a taut structure, but Curried Goat and Fishfingers is both thoughtful and full of infectious exuberance; ultimately optimistic that a frustrating, elating city of paradox has become a place with room for all.

Posted by Claire Thinking at 12:15