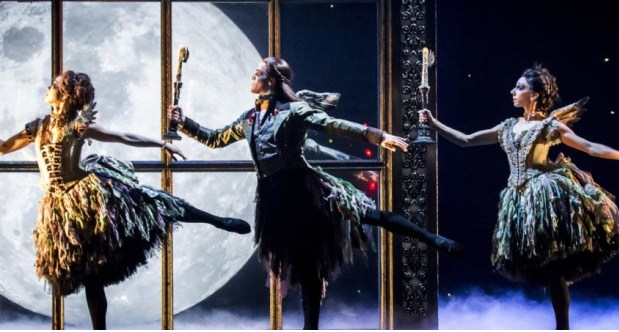 It's the Brothers Grimm fairytale that enchanted so many childhoods, the Disney film rewound until the video tape wore thin, but Matthew Bourne audaciously reinvents the classical ballet of Sleeping Beauty for an audience all too familiar with its content.

By immersing himself in all the versions of the story he could find, then throwing in some twists of his own, Bourne presents an exquisite but accessible fusion of ideas that opens with his New Adventures company in the Gothic splendour of 1890. It’s a time-frame that allows for a richly expressive reinterpretation of Tchaikovsky’s score and a whole range of sumptuous possibilities for Bourne’s long-time collaborator, set and costume designer Lez Brotherston.

The production is a visual feast from the start, as the King and Queen who longed for a child have their dearest wish granted, only to find their daughter cursed by the dark fairy, Carabosse. Bourne’s retelling introduces Aurora in puppet form as a mischievous toddler, clambering up the curtains and evading the servants, before being entertained with teasing vibrancy by a troupe of fairies representing such foreshadowing, elemental forces as passion, plenty and rebirth.

Swept aside by Carabosse’s dark vision, their King is able to mitigate the worst of her evil intentions, propelling us into the golden Edwardian summer of 1911 as Aurora comes of age; a free-spirited, independent young woman surrounded by suitors including Leo, the royal gamekeeper, whom she favours with her love and Carabosse’s enigmatic son Caradoc, introduced to the plot with a determination to carry on his mother’s fiendish legacy.

On press night, Ashley Shaw as Princess Aurora and Chris Trenfield as Leo combine in a series of pas de deux, which interpret both the playful and the passionate with lyrical ease, while Adam Maskell, dual-rolling as both Carabosse and Caradoc, is a commanding and charismatic presence who channels more than a little of The Twilight Saga’s Cullen family. Christopher Marley’s Count Lilac, King of the Fairies, more than tests his mettle in matching him; the vampiric theme recurs as a force for both evil and good and an elegant solution to the inherent difficulty of driving the narrative forward by 100 years into the 21st Century.

There are some stunning ensemble pieces from the company and technically, this is a flawless production. Paule Constable’s lighting imbues the land of sleepwalkers – a half-world of limpid ghosts seeking release – with all the painterly, textural beauty of a Hockney landscape. The use of a conveyor throughout to introduce dancers at the back of the set is simple yet stunningly effective, adding a further dimension to a high-value production that is a seamless blend of contrasting pace and dance styles from classical to contemporary.

The finale is full of edgy colour, wit and dangerous dramatic tension to the last step; a fitting end to this triumphant revival of a tale of good versus evil which continues to resonate on every level.

Posted by Claire Thinking at 16:49