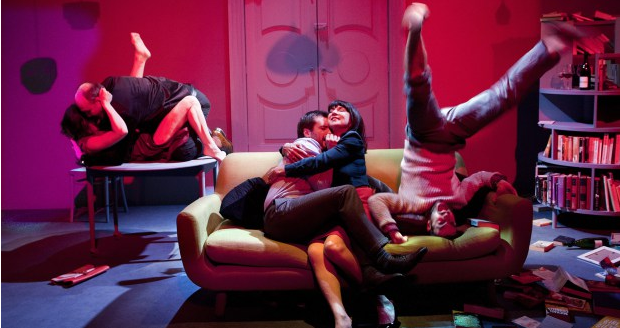 Like Florian Zeller’s The Father and The Mother – recent predecessors on the same stage – in Right Now Quebecois playwright Catherine-Anne Toupin toys with her audience’s perceptions from the outset. Rather than using repetition as a device, Toupin’s is a version of shifting reality that poignantly comes full circle.

Alice and Ben have recently moved into their stylish new apartment, but with Ben working long hours as a doctor at the hospital, Alice has too much time to nurture her loneliness. The cry of her baby sends her into palpable shivers of pain; what seems to be a severe case of post-natal depression begins to take on the mantle of something even more disturbing. If this doesn’t seem like a sound basis for even the bleakest of comedies, then the introduction of the neighbours across the hall changes that.

The Gauches are so loud that you instinctively feel yourself wanting to shush them; faded temptress Juliette Gauche, as though reincarnated from Abigail’s Party, introduces her grown-up son, François, and smoothly reptilian husband, Gilles, in a manner that will brook no refusal. And so, before long – fuelled by the twin powers of red wine and shared community – the neighbours are exchanging intimacies along with the hors d’oeuvres. Torrid tales of how each couple first met, flavoured with erotically charged glimpses of lingerie, lead to ever more unsettling encounters within this increasingly disturbed quintet – despite Herculean efforts at pantomime distraction from a frenetically book-juggling, cart-wheeling François.

If it feels like the writer is delving into her own subconscious – like Yasmina Reza’s God of Carnage on acid – then it’s no surprise to learn that Toupin has used her family’s personal experience of grief as the basis for her writing. In this, she’s well supported by Chris Campbell’s vibrant translation, which transports the French-Canadian original from a land surrounded by English speakers to a similarly resilient Scottish setting, as well as enthralling performances from the tightly meshed cast.

Lindsey Campbell, already a Ustinov veteran from The Big Meal and The Harvest, delivers a finely nuanced portrayal of depression and loss as the frail and vulnerable Alice. Veering between clutching her dressing gown tightly around her and throwing on a dress with waif-like beauty, she is never less than magnetic; at least to father and son Gilles (Guy Williams) and François (an assuredly pivotal Dyfan Dwyfor), if not to her husband – Sean Biggerstaff’s cruelly indifferent Ben. Juliette, played with a consuming, larger-than-life relish by Maureen Beattie, certainly appreciates Alice’s attractions too, if only because she reminds her of her younger self, but is even more drawn to Ben, who represents all that her own son is not.

Michael Boyd’s direction makes the most of this exciting, shape-shifting writing; the pace never lets up, allegiances cross over and events become ever more surreal. By contrast, Right Now’s ending teeters on the brink of being out of kilter and yet gives real pause for thought; an absence turned into tenderly physical presence, whose reality might just be taking us back to where we thought we were in the beginning, with the same uneasy questions to answer.

Posted by Claire Thinking at 11:09