After wrestling too long with Herman Melville, it's with relief I turned to Franz Kafka for Week 4 of my MOOC*, even if he has been called 'the coldest writer of them all'.

In a course about relationships, it's a fascinating prospect to study a writer who had such trouble with them. The only work of his I've read to date is The Trial, so I've been looking forward to extending my knowledge.

Professor Weinstein describes Kafka as triply alienated; a German-speaking Jew living in Prague. His two stories The Metamorphosis and A Country Doctor both illustrate this sense of otherness, where anything can and will happen. The protagonists are shipwrecked in their own changing bodies, just as we all may be through the aging process of debilitating diseases and decay.

*If you haven't read these two stories, there are spoilers*

The tale of travelling salesman Gregor Samsa, who wakes up one morning to find himself transformed into 'a horrible vermin', is one of Kafka's best known works. 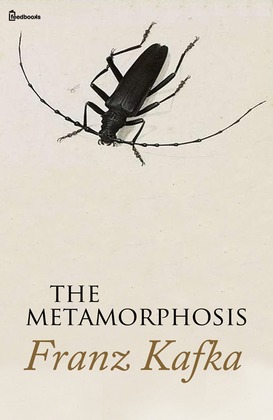 Gregor is a conscientious employee and his first prosaic concern is that he'll be late for work. He clings to the normality of routine, the reality of his new situation only dawning once he's managed, with difficulty, to open his bedroom door. There he confronts the horror of his parents and sister Grete, as well as the chief clerk who has arrived to berate him for not turning up in the office.

After the initial shock, Grete takes on the maternal duties of feeding and looking after him and Gregor gradually becomes more comfortable with his insect body, climbing the walls and ceilings. But he's unable to communicate with his family and stays shuttered away in his bedroom lair, listening to their discussions of how they will cope, now he can no longer provide for them.

Kafka was humiliated by his father and Professor Weinstein suggests this tortured relationship is mirrored in The Metamorphosis, with Gregor, originally the family breadwinner, in turn ignored, attacked and fatally injured by a father rejuvenated through his son's misfortune. We already recognise that for Kafka, writing was a priestly act not compatible with relationships. It may be that it was also a form of therapy, a way of reasserting himself against his father's tyranny.

As Gregor increasingly 'exits the human', there is a question mark over how his family interpret him. Is he still their son and brother? Grete doesn't think so:


I don't want to call this monster my brother, all I can say is: we have to try and get rid of it. We've done all that's humanly possible to look after it and be patient, I don't think anyone could accuse us of doing anything wrong.

They don't have the access to his internal perspective that the reader does and have no way of communicating with him. Increasingly, they view him as a burden and a pest.

Gregor is fatally injured by his father's apple-throwing. He stops eating, another theme commonly found in Kafka's work, where many protagonists have problems with food. In his 1924 story A Hunger Artist,  for example, the fasting man laments that he only does so


because I couldn't find a food which tasted good to me. If I had found that, believe me, I would not have made a spectacle of myself and would have eaten to my heart’s content

Similarly, Gregor has been denied his humanity. The only form of nourishment he can find is through his sister's violin playing and this will not sustain him. He dies because of a failure of empathy which, Professor Weinstein argues, is how genocide occurs.

Gregor never asks how or why this has happened to him, so we as readers ask instead. Was he already an automaton, a slave to his job, so that his transformation is from one form of mindlessness to another? Or does he represent an artist, living a weird, individual existence and shunned by those around him?

The family don't mourn Gregor's passing as they surely would if he had died in a more conventional fashion. As he is discarded with the rubbish, they decide they can move to a smaller flat now and Mr and Mrs Samsa notice for the first time how Grete has grown into an attractive young woman. Professor Weinstein suggests an interpretation of Gregor as a sacrificial, Christ-like figure, giving his life so his family can recover theirs.

A doctor having to urgently attend a sick young patient on a winter's night is stranded because his only horse died the night before. In this absurdist tale it seems there's no hope, until a groom unexpectedly emerges from the disused pigsty with a crack team of horses. But there is a Faustian pact to be made because, as the doctor speeds away to his house call, he realises that the groom will rape his maid, Rosa, while he's away. Kafka's surreal story has the texture of a dream and it is this doctor's nightmare - one where he surrenders control. In arriving at his patient's bedside, he first diagnoses him as being completely well, before realising he has a gaping wound in his side.

This story is hard for the reader to understand, too. The shaped of the wound suggests a sexual dimension which seems to refer to Rosa's ordeal, reinforced by the horses neighing frantically at the windows. Is there a purpose to the suffering and the wound itself? Professor Weinstein quotes Kafka's violent imagery


Art is the axe for the frozen sea within us

So is this wound 'art', the breaking of one code of logic, in order to create another?

Finally, the doctor becomes a sacrifice, stripped of his clothes and laid beside his patient. If he can't save a life it seems he must be killed. Professor Weinstein draws a comparison with King Lear, who tears at his own clothes in his madness and proclaims to Edgar that


unaccommodated man is no more but such a poor, bare, forked animal as thou art

The doctor has lost his trappings of authority and is reduced to the same lowly status as his patient. In the completion of another form of metamorphosis, he has realised that writing a prescription is easy, but coming to an understanding with a fellow human being is hard.

Email ThisBlogThis!Share to TwitterShare to FacebookShare to Pinterest
Labels: A Country Doctor, Franz Kafka, The Metamorphosis