I've been wanting to read Simon Sebag Montefiore for some time - although unusually it's his non-fiction works on Stalin that most interest me as background for Bulgakov's classic The Master and Margarita. Nevertheless, my book group's next choice of Sashenka seemed serendipitous; not least because Montefiore's novel of revolutionary Russia covers some of the same ground as Young Stalin.

This epic story of over 600 pages begins in 1916, with one woman's involvement in the Bolshevik uprising in St Petersburg, before moving through the decades to portray her experiences of Stalin's crushing repression in the 1930s and finally the next generation's attempts to discover what happened to her. 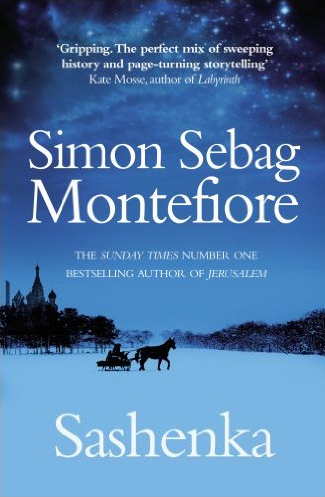 Sashenka Zeitlin, 16-year-old schoolgirl and daughter and of a well-heeled Jewish merchant with connections to Russian royalty, is imprisoned in St Petersburg's Kresty prison. Her mother, a ravaged beauty and devotee of Rasputin, is living an drug-fuelled high-life full of easy relationships with men and doesn't seem too concerned about her daughter's well-being. It's Sashenka's Uncle Mendel who's converted her to Marxism and drawn her into the Bolshevik party. While her father's influence means that Sashenka's imprisonment is a short one, it still marks the beginning of a lifelong involvement with Communism. Delivering messages and running workshops on Marxism, known as Comrade Snowfox because of her furs, she becomes ingrained in party life, although her background means the suspicion of her comrades never completely leaves her.

Despite a fascinating chronicling of events - from meeting the stuttering Comrade Molotov to working directly for Lenin - in this first part of the novel, the central character of Sashenka fails to fully convince. Often, she appears more of a two-dimensional peg to hang with historical detail than a living, breathing girl on the cusp of womanhood; there are early references to her full breasts, which appall and embarrass her, but otherwise she is usually described through the eyes of the men she unfailingly captivates: her figure slim and appealing, her lips wide, crimson and slightly swollen.

Part Two leaps forward to Moscow in 1939 and - despite Montefiore's seeming desire to cram in as much historical detail as possible leading to a meandering style - to me is more involving. Sashenka has become a loyal Bolshevik wife and the mother of two small children; she and her husband have already survived several purges, made personal sacrifices for the good of the party and even entertained Stalin in their own home. Yet, as she is drawn into an affair of the heart, Sashenka is in danger of losing all she has worked for and holds dear. Falling from the party's favour is terrifyingly swift, brutal and absolute; utmost in Sashenka's mind as she approaches this precipice is the safety of her children - will she be able to get them out of danger in time?

The final section of the book moves to Moscow in 1994 where Katinka, a young Russian historian, is trawling through Communist archives in an attempt to discover what really happened to Sashenka and her children. Often, she unwittingly treads the same ground as her subject, but despite its fall from power, Communism refuses to give up its secrets easily. There are many twists and turns and insights into the scope of the horrors committed at the time, before Katinka is able to uncover the tantalising truth.

By the end of this novel, I was torn between genuine interest in what had happened to Sashenka, admiration for its historical content and a strong desire to be done with characters who never truly came alive in my mind. Similarly, my book group's opinion was divided between love and dislike for Sashenka. I would still read Montefiore again - but I wasn't drawn into perusing the first few pages of his next novel One Night in Winter that were appended to this one; next time, I'll be opting for non-fiction.

Posted by Claire Thinking at 14:02