Book Review: Wolves in the Dark by Gunnar Staalesen

Private investigator Varg Veum is back, and this time he's in real trouble. As readers of Gunnar Staalesen's previously translated Nordic noir We Shall Inherit the Wind and Where Roses Never Die will know, Veum has been plunged headlong into despair by the loss of his long-term partner Karin. If you haven't read either of these titles yet, there's enough backstory in Wolves in the Dark to make his predicament clear. 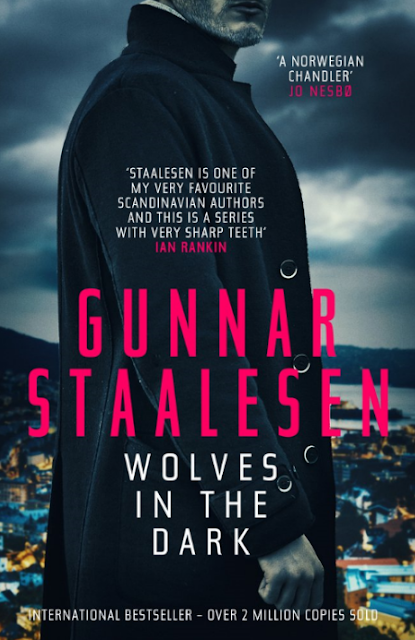 Hauled into Bergen's police station for questioning after an early morning raid, Veum is astounded to find himself accused of accessing child pornography online. A cache of incriminating material has been found on his computer and he's remanded in custody as a suspected member of an international paedophile ring.

After three and a half years of trying to obliterate his grief with alcohol and one-night stands, Veum has recently met Sølvi and found some solace in their tentative new relationship. But he's still over-reliant on his bottles of Aquavit as a crutch, and there are too many holes in his memory.

Yet, despite the blackouts, Veum is convinced of his own innocence. Will he be able to remember enough to identify the person who hacked into his computer and planted the evidence?

He has no shortage of enemies, indeed his confrontational style is destined to ruffle plenty of feathers. Now it seems there's a dearth of sympathy from those already decided on his guilt. So, when an unexpected chance to escape presents itself, Veum grabs it with both hands. On the run, he now has a fraught and hazard-strewn opportunity to clear his name and solve his most testing case of all.

Staalesen's writing, translated from the Norwegian with accustomed fluency by Don Bartlett, is as tense and spare as ever and his gruelling subject matter is treated with sensitivity. Veum is humanised by his self-deprecating acknowledgment of a flawed past, in contrast to the repulsive and amoral - but always believable - inhabitants of Bergen's murky underworld. There's a palpable sense of place as Veum crisscrosses city streets while ducking away from the police and Staalesen introduces enough twists, turns and dead ends along the way to keep intrigue levels smouldering nicely. Gripping and satisfying, Wolves in the Dark is proof that this father of Nordic noir has lost none of his enduring powers.

Wolves in the Dark was published by Orenda Books in paperback on 30 June 2017. Many thanks to them for my review copy.
Posted by Claire Thinking at 13:48