Dying to Live is the latest thriller by South African writing duo Michael Stanley (Michael Sears and Stanley Trollip) to feature Botswanan detective David 'Kubu' Bengu. You can read my review of Deadly Harvest, an earlier book in the series, by clicking on the title link. 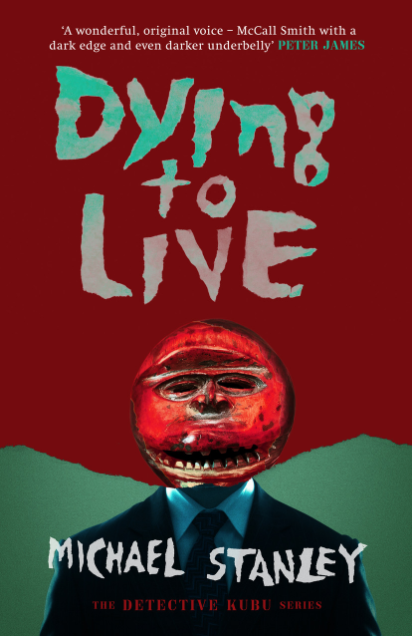 This new instalment plunges straight into the sweltering heat of the Kalahari desert, where a Bushman's body is found near a road to the game reserve. Back in Botswana's capital Gaborone, where he is taken for an autopsy, a puzzle emerges. The deceased is white-haired, frail-boned and clearly very old, yet his internal organs appear to be those of a much younger man. What's more, there's a bullet lodged in one of his muscles - yet no sign of an entry wound.

Although the case is being investigated locally, Kubu can't help looking into it - especially when he feels inquiries are drawing to a premature close. He discovers the Bushman had been much sought after because of his oral storytelling abilities and profound knowledge of the Kalahari's healing plants - of particular interest to anthropologists, international drug companies and local witch doctors alike.

Once more, the narrative mixes police procedure with Kubu's home life - where his adopted daughter Nono, HIV positive from birth, is suffering from the complications of her condition. Kubu's mother advises traditional remedies but he and his wife Joy are determined that modern Western style treatments will prevail - until a crisis causes an unexpected rift between them.

Kubu's dedicated young colleague Samantha Khama begins investigating a separate mystery: the disappearance of a renowned witch doctor rumored to offer a powerful traditional medicine or muti promising eternal life. Then the Bushman's body is stolen from the morgue and the two cases begin to overlap. The detectives find themselves enmeshed in a complex web of greed, corruption and murder, spanning the continents as far as America and China and back again.

The vibrancy of Gaborone and insights into Botswanan life - the clash of ingrained traditional beliefs and modern thinking - once again provide a compelling backdrop. Kubu is as thoughtful and endearing a central character as ever, hiding his steely determination and incisive mind behind the guise of a family man and food-lover who rarely misses a meal, no matter what comes up - yearning for that second portion of bobotie or rifling through his office drawers for snacks. My only quibble is that the authors introduce a few too many new characters to grapple with late on in the plot, threatening to confuse what is otherwise another intriguing and involving slice of  'Sunshine Noir'.

Dying To Live is published on 30 July 2017 by Orenda Books. Many thanks to them for my review copy.
Posted by Claire Thinking at 18:49