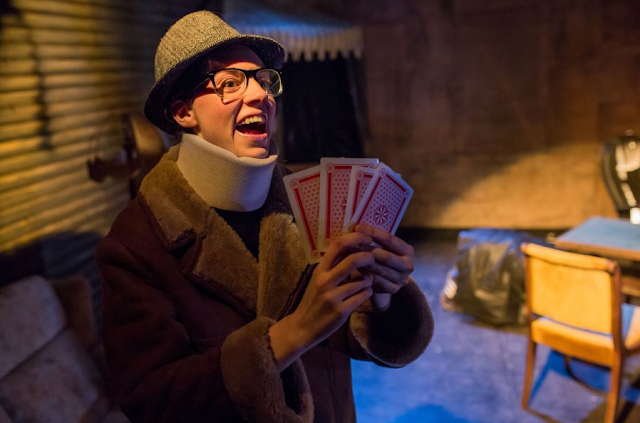 It may be July, but that doesn’t stop The Wardrobe theatre company from reprising its 2015 Christmas show, this time in the Factory Theatre.

And why not, when this seasonally ubiquitous mash up of Guy Ritchie’s 1998 cockney gangster film Lock, Stock and Two Smoking Barrels with the Goldilocks and the Three Bears fairy-tale has proved to be such a Bristolian hit.

Even if your recall of the original stories is too fuzzy to pick up all the self-referencing jokes, there’s still plenty to enjoy in this comic caper devised by director Adam Fuller and his four-strong cast. Goldilock (Emma Keaveney-Roys), a struggling East End market trader, finds herself short of cash and takes on a seemingly straightforward furniture delivery job for local mobster Vinnie (Andrew Kingston). Unwittingly, she becomes entangled in the seedy card-sharping underworld of gangland boss Harry (Harry Humberstone) and his sidekick Barry (Lotte Allan).

The four players blast their way through multiple roles as Goldilock seeks to recover a mistakenly appropriated chair from the dingy pad of three very privileged and drug-addled bears. Throw in a family of extreme Scottish porridge providers flogging hipster takeaway breakfasts and you have the recipe for multiple plot threads colliding with riotous results.

It’s all very meta, as Goldilock undoes her own storyline by questioning the physics behind the porridge’s drastic temperature variation and deciding her bed at home is more comfortable. Meanwhile, Ritchie’s slow-motion character introductions and card game sequences are ingeniously invoked with help from Edmund McKay and Ben Osborn’s lighting and sound design.

The cast maintains the madcap energy throughout, with only the occasional moment of quiet self-reflection pervading the succession of high-octane scene and costume changes. Keaveney-Roys keeps the complex narrative clear and strong while Humberstone excels in comedic physicality and characterisation. Harry’s ongoing bromance with Allan’s none-too-bright Barry is the show’s standout storyline, both hilarious and oddly touching in turn. The three bears – Winston, Rupe and Paddy – are similarly well-defined, with only the Scottish porridge makers outstaying their stage-time, never rising above the two-dimensional while seeming to add little to the plot.

Perhaps this is something to work on before the show continues its upward trajectory with runs at this year’s Edinburgh Festival Fringe and The Drum in Plymouth in December. It doesn’t detract overall though from a clever, silly and uproarious show that may be short on subtlety but is always long on laughs.

Posted by Claire Thinking at 11:38