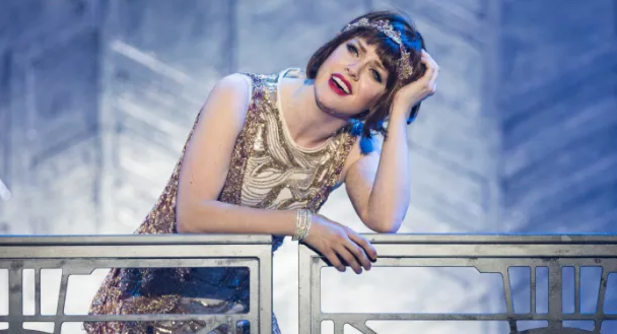 Be warned though, around the edges, it does feel dated. In this revival of the 2002 musical, based on the 1967 film starring Julie Andrews, Millie Dillmount from Kansas arrives in the 1920s metropolis of New York. Determined to be a ‘modern’ girl, she undergoes a rapid flapper makeover – all bobbed hair and fringed hemline – takes a room in a women-only hotel and decides her future lies in getting a job that will allow her to marry the boss.

Most charmingly, she seems to spend her time falling for the enticing but impecunious Jimmy Smith, played by a debonair Sam Barrett, instead. Less charmingly, there’s a questionable sub-plot centring around white slavery that involves the hotel’s proprietor Mrs Meers (Lucas Rush) and two Chinese helpers (Nick Len and Andy Yau). These scenes have their comedic moments but don’t sit comfortably with the present day, either in the storyline or racial stereotyping.

Clifton proves she can sing and act as well as dance with pleasing on-stage presence – although her Millie, like many of the production’s characters under Racky Plews’ direction, is a broad-brush stroke creation veering towards the overly-dramatic. One shining exception to this is Jenny Fitzpatrick as Muzzy Van Hossmere, who elevates the closing moments of the first half with her luminous performance of Only in New York. Many of the show’s amusing highlights involve Graham MacDuff as Millie’s boss Trevor Graydon: dictating letters at speed, falling head-over-heels in love and portraying a flailing comedy drunk with all the co-ordination of a flamingo on an ice-rink.

At times, the pacing flags and scenes feel protracted, particularly in Act One. It’s the ensemble numbers that really zing with clever choreography; the title song Thoroughly Modern Millie is an obvious highlight. Then there’s the desk-dancing, swivelling stenographers of Millie’s workplace and Forget About the Boy, the rousing opening number in Act Two.

The colourful and glittery sequinned flapper costumes look as though they’ve been borrowed straight from Strictly’s wardrobe. Morgan Large’s art deco set neatly captures the New York skyline as well as doubling as a hotel lobby and workplace, even if by the end it feels as though it has run out of surprises. But the small surtitles, providing occasional Chinese translation, are both a distraction and difficult to read in a large venue and, on press night, there are some occasional problems with clarity of sound.

If Thoroughly Modern Millie is not generally held up as a classic of musical theatre, then this production will do little to alter that view. Overlook certain aspects of the plot though and it does provide plenty of good old-fashioned entertainment and a toe-tapping distraction from current reality.

Posted by Claire Thinking at 11:37