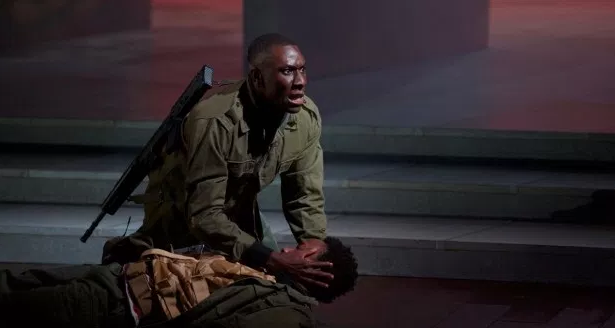 With controversy over Trump-as-Caesar raging in New York, the latest collaboration between Bristol Old Vic and its theatre school seems set on a similar theme. As an examination of a society in the process of destroying itself, their contemporary production of Julius Caesar feels at least as relevant to the political situation on this side of the pond.

Following on from last year’s King Lear, which combined the experience of Timothy West and Stephanie Cole with the zestful enthusiasm of 2016’s new graduates, this year’s choice Julius Caesar sees Julian Glover in the eponymous role. Lynn Farleigh is Calpurnia and John Hartoch the ‘beware the Ides of March’ Soothsayer, with all other roles played by Bristol Old Vic Theatre School’s 2017 students.

The sleek, statesman-like dignity of Glover’s proud Caesar, returning to Rome in triumph from battle, is in stark contrast to the impassioned urgency of the youthful conspirators led by Cassius (Edward Stone) as they seek to recruit Caesar’s loyal friend Brutus (Freddie Bowerman) to their cause.

Stone is a suitably urbane Cassius, while Bowerman’s central performance as Brutus is one of convincing nuance and plausible, if ill-conceived, moral reasoning, as he wrestles with his conscience. Finally, we see him persuaded of his patriotic duty to participate in Caesar’s assassination, to prevent the harm that might be inflicted in future on the people of Rome.

The talents of the theatre school students are also much in evidence in the production’s distinctive creative design. The simple monolithic panels of Sarah Mercadé’s set, sparingly accessorised to accommodate scene changes from a raging storm to Caesar’s residence, combines with Jessica Edkins’ raucous sound design – the sirens and gunshots of approaching mob rule – and strong, mood-intensifying lighting from Paul Pyant.

After the interval, there is a little space for quiet contemplation as Caesar’s ghost revisits the battle-ground of the warring factions and Brutus reflects upon his deeds. Then the battle scenes erupt into life and suicidal recriminations begin. It’s to the young company’s credit that this phase of the play, so often messy and anti-climactic, is held together with taut and crisp action.

Subtle this Julius Caesar generally isn’t and clarity of verse may be occasionally lost in the melee, but under Simon Dormandy’s direction it never lets up on the engrossing entertainment. This energetic production not only showcases the best of Bristol’s emerging talents and gives them the chance to learn from established practitioners, it also proves thought-provoking and relevant in its own right.

Posted by Claire Thinking at 11:33