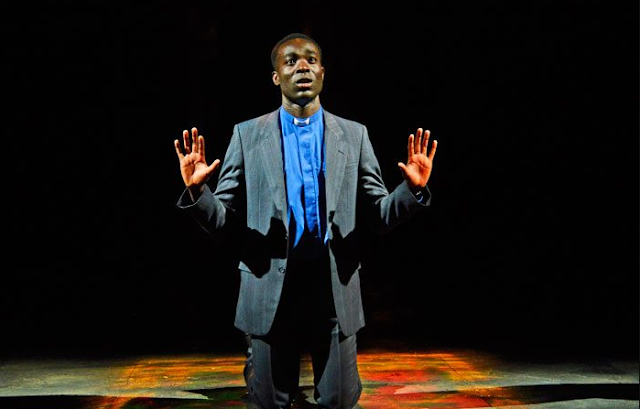 Jonathan Church’s inaugural summer season for Bath’s Theatre Royal signalled changes from the moment his programme was revealed – without any hint of the usual Shakespeare or Coward. Instead, it opens with a revival of David Hare’s 1990 play Racing Demon, a meditation on the state of the Church of England, complete with a heavyweight cast.

The production takes a while to get into its stride. At its centre is Lionel Espy, played by David Haig, a priest who has essentially lost his faith but retains his conscience. He’s out tending to his south London flock at all hours – without wanting to specifically mention God or Jesus, for fear of putting them off. Haig, infinitely adaptable and always watchable, here portrays a tortured soul cloaked in the cassock of a self-effacing man of the people – more comfortable with A4 summaries of good intentions than specifics of sacrament and doctrine.

Contrast this with Paapa Essiedu’s firebrand young curate Tony, who has little patience with Lionel’s reticence and advocates an evangelical approach. Essiedu proves that his recent stellar trajectory has been no fluke as he portrays Tony’s single-minded insistence on delivering change while giving glimpses of inner conflict. He’s all direct action and filling the pews, at the expense of Christian tolerance in his personal relationships, especially with his forbearing partner Frances (Rebecca Night).

It’s difficult to know where Night can go with Frances, less of a character in her own right and more of a canvas for others to project upon – as is Lionel’s neglected wife Heather, played by Amanda Root, bringing a heartbreaking reticence to the role. But ultimately, in a church that in the 1990s is baulking at ordaining women bishops, it’s all about the men.

Here, there’s much to admire, both in the profound performances and David Hare’s incisive writing that juxtaposes rival forces in a Church struggling to maintain its position. The soliloquies, as each character shares their innermost thoughts with God, are revealing and affecting. Arguments intensify from the theological to the personal as the authoritarian Bishop of Southwark (Anthony Calf) seeks to enforce his will. There’s a light-hearted interlude as Lionel’s colleagues Donald ‘Streaky’ Bacon (Sam Alexander) and Harry Henderson (Ian Gelder) defend his livelihood while drinking too much tequila at the Savoy. Most poignant of all are the moments when Tony re-examines his shattered childhood and Harry tranquilly comes to terms with the impossibility of his own situation, while still encouraging Lionel to fight.

Simon Higlett’s understated and subtly lit design effectively evokes the surroundings of church and synod, yet it does feel as though the play is creaking a little at the seams, compared with issues tackled so astutely in the recent television sitcom Rev. Women’s ordination and homosexuality remain contentious in some quarters but events have moved on – to discussions of same-sex marriage and scandals centring around abuse. Racing Demon is a work that remains firmly set in 1990, harder to relate to now than some of Hare’s other plays of the era, such as his dissection of the political establishment in The Absence of War. Seen through this prism, though, it remains a compelling examination of personal and institutional turmoil.

Posted by Claire Thinking at 11:40