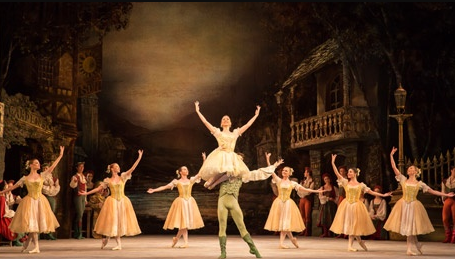 Based on the stories of E T A Hoffmann, Coppélia is the lightest and most fragile of confections; the tale of a mechanical doll who entrances and enrages in equal measure. Yet the enchantment of this enduringly popular 19th Century work is underscored by this classical production from Birmingham Royal Ballet.

Not for this company a touring set of a few two-dimensional scenery flats; their Coppélia is a sumptuous creation of pastoral idyll and opulent costumes, designed by the late Peter Farmer and delivered to Bristol by a fleet of articulated lorries. There’s a complete (and lengthy at times) scene change between each of the three Acts.

It’s an exquisite backdrop for the story to unfold, as Swanilda (Céline Gittens) meets her lover Franz (Tyrone Singleton) in the village square, only to find him distracted by the beautiful lifelike doll that eccentric toymaker Dr Coppélius (Michael O’Hare) has placed on his balcony. Gittens is a beguiling Swanilda, her dancing lyrical and expressive, in complete control of the technical challenges of the role. Her mime is full of a spurned sweetheart’s fury as she admonishes her flirtatious fiancé and questions his faithfulness, followed by darting mischief as she and her nervous friends steal into the toymaker’s workshop to find her mysterious rival.

Gittens' performance is matched by Singleton’s charismatic Franz, more loveable rogue than love rat, despite his roving eye. Singleton dances with strength and fluidity and his on-stage chemistry with Gittens is persuasive throughout. This is combined with an assured comedic touch as he tiptoes across the village square with a ladder to climb up to Coppélia’s balcony, then ineffectually tries to evade capture by the angry Doctor.

The story may be featherweight and the outcome never in doubt, yet Delibes’ incurably romantic score, sensitively interpreted by the Birmingham Royal Ballet Sinfonia under the baton of Paul Murphy, is impossible to resist. The central second Act of magical discovery in the toymaker’s workshop is captivating, as the individual dolls are wound up and come to life and Coppélius tries to capture Franz’s spirit to transform his most prized creation into a living, breathing woman.

No less impressive are the set piece dances; the gypsies are a whirl of scarlet and green and the Eastern European Mazurkas and Czárdáses a highlight of Act I. Daria Stanciulescu is imposing as the gypsy temptress who dances with Franz despite Swanilda’s protests. Equally spectacular is the succession of celebratory dances in Act III’s Masque, particularly the gravity-defying Call to Arms.

Posted by Claire Thinking at 13:09