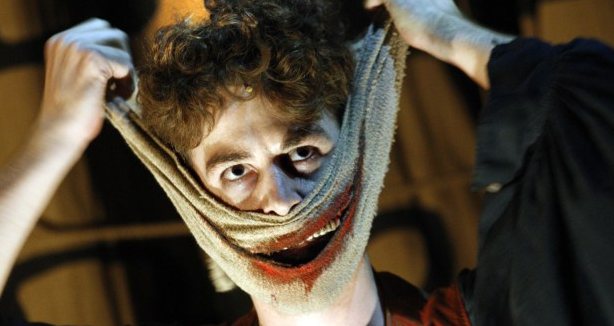 The land of The Grinning Man is one of seeping pain and lost memories, where the old cannot forget while the young seek desperately to remember. Director Tom Morris and writer Carl Grose have taken Victor Hugo’s 19th Century novel The Man Who Laughs and transplanted it into a timeless, ravaged otherworld that also happens to be England’s capital city…Bristol. It sets the tone for this brand new musical; combining grotesque, mercurial transformation through suffering with earthy comedy and love, told with social commentary.

Les Miserables it’s not, but the story retains Hugo’s depth and complexity; Grinpayne lives with a bandaged face, covering scars from infancy that have left a permanent, hideous grin. As a child, he was rescued, along with blind baby Dea, by a pedlar of potions and freak show proprietor at Stokes Croft fair. A show-within-a-show uses shadow play and puppetry to tell Grinpayne’s story from when, as a young boy, he lost his mother at sea. The revelation of his face proves infectious, transforming the lives of those – from commoner to royalty – who watch. But, while Grinpayne is desperate to discover who he really is, there are those equally determined he should never unearth the truth.

There’s strong ensemble work from the cast and Julian Bleach as the spidery Barkilphedro takes on the Emcee’s role with darkly comedic aplomb, as though in a version of Cabaret directed by Tim Burton. Louis Maskell is a charismatic, compelling Grinpayne, convincing in his ability to transgress normal societal barriers and save a nation while Audrey Brisson as Dea channels emotional clarity and strength into exceptionally pure singing. Onto this canvas, Gloria Onitiri as the louche Duchess Josiana and Stuart Neal’s nice-but-dim Lord David layer energy and entertainment with their double act of hapless, self-centred royalty.

The original score by Tim Phillips and Marc Teitler has a refreshingly folksy and organic feel, deploying the necessary emotional drive but occasionally bogged down by the weight of exposition, particularly in the first half. Here the story verges on confusing and overlong but in the second half there’s no such problem; with a firm grip on its evocative carnival atmosphere, the narrative picks up breath-taking pace.

Jon Bausor’s distinctive design – a giant smiling mouth encasing a grimy stage – sets the macabre scene while puppetry from Gyre and Gimble, part of the team behind War Horse, is tenderly, exquisitely realised – especially in Mojo, the wolf. One or two other aspects – the picture-frame portraits used one too many times now and strangely simplistic neon faces – work less well.

There’s more than a hint of Kneehigh – Grose also penned Dead Dog in a Suitcase and many of the actors are regulars with the Cornish company. There are also touches of a diamond in the rough, one that will continue to improve with performance and revision. But this production undoubtedly resonates with universal themes; it’s ambitious, exuberant and surprising – entirely fitting for Bristol Old Vic in its 250th year.

Posted by Claire Thinking at 14:46