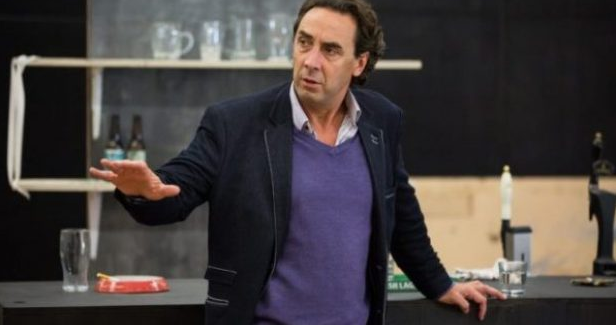 There’s a deceptive air of normality at the opening of Conor McPherson’s much garlanded 1997 play The Weir; another evening in a rural Irish backwater pub, where the regulars shut out the howling wind and gather for a few pints and a ‘small one’ or two.

Rachel O’Riordan – hugely successful last year in her direction of Iphigenia in Splott – takes the helm of this co-production between the Sherman and Tobacco Factory Theatres. Transferring to the intimacy of the Factory Theatre from its run in Cardiff, with Kenny Miller’s authentically spit and sawdust bare-wood design, it feels as though we’re listening into a series of illicitly intriguing conversations at the next table.

Yet, there’s a huge hinterland here. As Jack and Jim chew over their day with barman Brendan, their easy familiarity is underpinned by years of shared experience, growing up in the same small community, immersed in its traditions and now comparing betting tips. Then, this evening’s equilibrium is threatened by the arrival of local-boy-made-good Finbar with Valerie, a newcomer recently arrived from Dublin. It’s in seeking to impress the stranger in their midst that the men begin to tell stories from their past; tales veering into ghostly local folklore that also expose the bitter resentments and confessions of their own youth and childhoods.

O’Riordan mines the play for its rhythms; the startling intensity of the monologues, the poignant silent pauses and humour’s intense but welcome waves of relief. McPherson writes with exceptional skill and precision; his characters are quite ordinarily flawed and rounded, each one with their own moving and convincing story arc.

The five-strong company of actors rises to the challenge. Simon Wolfe is magnificent in his embodiment of the foul-mouthed, cantankerous Jack, unexpectedly reduced to displaying his emotional underbelly. You can hear a pin drop during Orla Fitzgerald’s shocking and revealing monologue as Valerie, so haunting and naturalistic is her delivery. Steven Elliot is glib as successful entrepreneur Finbar; in the end, despite his superficial veneer, he’s impossible to dislike. Meanwhile, Richard Clements disarms as the introverted Jim, still looking after his aged mother, and Patrick Moy’s Brendan is the glue that holds this fragile community together.

It’s a story to take home and ponder. Like Brian Friel’s revelatory Faith Healer or Barney Norris’ more recent Eventide, it explores the spaces between everyday life and eternity, the extraordinary emotional struggle and pain we all pack away behind the relief of routine. It also celebrates the power of conversation and the human need to commune.

A well-executed revival of a beautifully written, hauntingly melancholic and unexpectedly humorous play, this newest incarnation of The Weir makes 100 uninterrupted minutes pass in an instant, while still retaining the meaning of each word.

Posted by Claire Thinking at 11:30