In The Exiled, police detective Anna Fekete takes a break from the cold of Finland to return to Kanizsa, the Balkan village of her birth. But, what's meant to be a relaxing holiday turns into a fresh investigation, as her bag is stolen and the thief found dead next day in the mud of the riverbank. 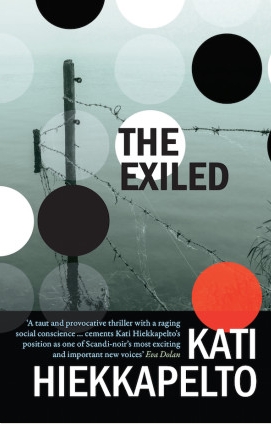 Anna can't help but get involved - even though her intervention is not entirely welcomed by the Serbian authorities. Details of their investigation don't ring true and she suspects something is amiss. As she probes more deeply into the background of the dead man - a Romany living on the marginalised fringes of society - she becomes more and more convinced that his death was no accident. She finds evidence of traffickers taking advantage of the thousands of refugees trying to cross the border into Hungary, of corruption and cover ups by officials. And, most frightening of all, a trail that leads back to her own family, that threatens to reopen the wounds of hurt and grief from her past.

Anna is a complex character - as readers of Kati Hiekkapelto's previous two Fekete novels The Hummingbird and The Defenceless will already know. Living in one country with her roots in another, she finds it hard to feel fully at home in either. Her policeman father was killed on duty while she was still a child and, in following in his footsteps, she's driven to extremes in her singular dedication. Her mother wants nothing more than for Anna to settle down with a family of her own - the accepted feminine role in traditional Kanizsa - but she is unwilling and unable to conform.

As in The Defenceless, Hiekkapelto mines themes that resonate with the world today; of migrants forced to flee from war, enduring the most abject conditions in their desperate scrabble for survival. Of racism, prejudice and playing politics with people's lives. Of a village fighting to retain its values and identity. In the midst of this she places Anna and her family, her loss of her father and older brother and renewed friendships with villagers who have never left Kanizsa.

Hiekkapelto writes in her signature taut, gritty and unsparing style - translated once again from the Finnish by David Hackston - though at times it feels like the insights into Anna's home life are weighing the story down. For me, it takes longer than in previous books for all the elements to come together - there are too many new friends and family members to fully get to grips with, perhaps. But the help she receives from Finnish colleagues leads to breakthroughs and her new relationship with Péter, a man she only began flirting with for information, becomes an intriguing aside. In the last third of the book, the tension mounts as the enormity of the crime is uncovered, leading to a shocking and satisfying conclusion.

The Exiled is published in paperback and ebook by Orenda Books. Thanks to Karen at Orenda for my review copy.
Posted by Claire Thinking at 11:24