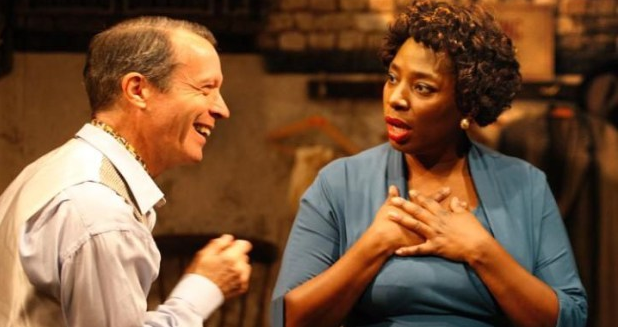 In the aftermath of a brutal 2016 election dividing the US along racial lines, Trouble in Mind offers a particularly timely glimpse of segregation in mid-20th Century America. Laurence Boswell’s latest production for the Ustinov revives Alice Childress’ trailblazing but overlooked work, originally produced Off Broadway in 1955; a race-play-within-a-race-play. It’s a powerful, funny and ultimately disturbing portrayal of the stereotypes African Americans have fought against for generations, which still resonate all too clearly with a contemporary audience.

Wiletta Mayer is a singer and actor with a lifetime’s experience, glad to take on the mother’s role in a new work, Chaos in Belleville, set in America’s deep south. She may have a low opinion of the play’s merits, but she’s willing to go along with it to keep the white director happy. Only as rehearsals progress does she begin to question its authenticity; simple black characters depicted through the prism of a white writer, protected from their own foolishness by the benevolence of a white boss.

Tanya Moodie turns in a powerhouse performance as Wiletta, simultaneously still excited by acting in the theatre and wearied to her bones by the limitations of playing ‘Mammies’ and ‘Jemimas’. She’s spirited, bold and brimming with energy; mining the nuances of every emotion, her larger-than-life bravado runs into sudden, devastating moments of defiance, as Wiletta gradually realises she’s no longer willing to gratefully accept the crumbs from the white man’s table.

While this is overwhelmingly Wiletta’s story, under Boswell’s vivid and well-paced direction, the whole cast is superb. The play’s other black characters may agree with Wiletta, but they’re less willing to put their jobs – and lives – on the line; veteran actor Sheldon (Joseph Marcell), the only one to have seen a lynching in real life, questions whether he would whittle a stick while his own son is in danger, but does it anyway. Kiza Deen’s Millie is bright and sassy in life but will only go through the motions of her part, while Daniel Ezra’s eager and naive John quickly discovers the compromises he must make to survive in theatre. Meanwhile, Jonathan Cullen delivers a mercurial portrayal of white director Al Manners, who has his own agenda; paying lip service to motivation and black lives, he’s ultimately dictatorial, ruthless and lacking in any real empathy.

Polly Sullivan’s set design has all the meticulous detail we’ve come to expect at the Ustinov; a dingy 1950s Broadway stage area for rehearsal, littered with mismatched furniture and assorted props. Alice Childress was herself an actor and Trouble in Mind is rooted in her own experiences; a work of rare intensity, excoriating humour and textural depth, that deals not only with racism but touches on sexism, too.

Could this be why the play, which won an OBIE award in 1956, has been so infrequently performed and too often neglected since? Ironically, it might have got to Broadway had Childress agreed to compromise with a white director’s demands to change the ending. Occasionally, it may seem to have too much happening to absorb in any one sitting, but this production of Trouble in Mind is not only an overdue revival; in the light of current social and economic upheaval, it also serves as an unsettling reminder of a patriarchal past that is still exerting its grip.

Posted by Claire Thinking at 15:56