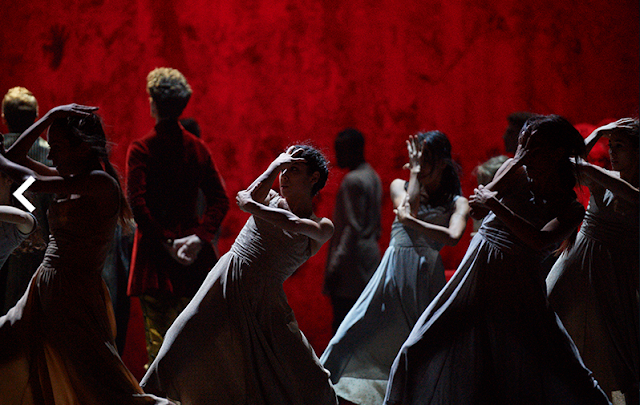 Huge anticipation has surrounded English National Ballet’s latest production of Giselle – especially since Akram Khan was confirmed as its choreographer. Having previously collaborated with ENB to choreograph Dust as part of 2014’s World War One commemoration trilogy Lest We Forget, his Giselle promises not so much a reworking of this classical favourite, as a stripping back to its core. The essence of the peasant girl and her doomed love triangle remains, but here she is reinvented with a contemporary edge as a migrant factory worker in a gang of Outcasts, hemmed into their shared misfortune by a massive, insurmountable wall.

It’s a setting that thrums with the cacophony of manufacture in Vincenzo Lamagna’s surging new composition, blended with live music from the orchestra and shot through by familiar motifs from the original score. The company of dancers are reduced to a lowly existence as cogs in a remorseless machine; pulsating with kinetic energy, they move to a timeless warp and weft – of England’s industrial revolution, perhaps, or Khan’s own Bangladeshi roots. Dispossessed of their jobs, the earthy, elemental endurance of the Outcasts is in stark contrast to the statuesque superiority of the obscenely super-rich Landlords; having no imperative to move, it is they who appear more hampered by their extraordinary costumes of outlandish gaudiness.

In the original 19th Century narrative, Giselle is courted by both local gamekeeper Hilarion and the already-betrothed nobleman Albrecht, who, to win Giselle’s love, has adopted a peasant’s disguise. Here, their roles are less defined; Hilarion is described as a ‘shape-shifter’ – a gang-master, maybe – bridging the worlds between the Landlords and their underlings. Meanwhile, Albrecht’s duplicity in winning Giselle’s love is only made clear at the end of the first act; in this retelling we realise it at the same time as she does. For some purists, this may just be a step too far.

What this production lacks in narrative clarity, however, it more than makes up for in the sheer scope of its visual and aural impact; from the beginning, hypnotic rhythms incorporate Khan’s Kathak influences in the forceful, riveting vitality of the whole company, beautifully contrasted with moments of loving tenderness, heart-breaking betrayal and the eternal silence of separation. Tim Yip’s austere but strikingly ethereal set design and costumes create this world and set the tone from the outset for the dancers to illuminate.

Artistic director and lead principal Tamara Rojo’s portrayal of Giselle is hauntingly vulnerable but courageous, expressive to her fingertips and lyrical in her pas de deux with James Streeter’s princely, although slightly understated, Albrecht. Cesar Corrales’ dark and brooding Hilarion emphatically imposes his will in the first act before meeting his demise in the second, while Stina Quagebeur as Myrtha is a truly chilling Queen of the Wilis, her pointe work spectacular as she attempts to enlist Giselle into her stick-wielding marionette army of the dead. The contrast between the chaotic world of the living in Act I and the regimented, spectral Wilis in Act II is dramatically marked by their elevation on to pointe, towering over their chosen victim as they close mercilessly around him.

Bristol is only the second venue to host this production of Giselle after its premiere in Manchester, high on the list of cities bearing witness to this mould-breaking metamorphosis of an already-revered classic. Although not without flaws, this is a work of such visceral emotional intensity, it surmounts any quibbles you might throw at it and promises to linger in the memory for years.

Posted by Claire Thinking at 11:09