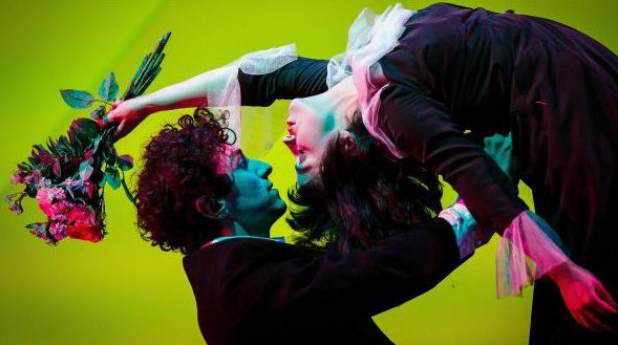 Celebration is in the air at Bristol Old Vic, as the UK’s oldest working theatre marks the 250th anniversary of its opening. And the birthday festivities continue this week in collaboration with the ever-exuberant Kneehigh, bringing Emma Rice’s final production for the Cornish company, The Flying Lovers of Vitebsk, to the main stage.

The lovers in question are Marc and Bella Chagall, who met and fell in love in 1909 in their Russian hometown of Vitebsk. They shared a particular vision of the world; Bella, a gifted writer, quickly became her painter husband’s muse and continued to inhabit his canvases for the rest of her life. Famously, he often depicts them flying together – their love embodied as a physical reverie.

Marc Antolin as an elderly Chagall looks back over his life; he and Audrey Brisson have the daunting task of telling the couple’s story as a two-hander in a combination of direct address and tender vignettes. Joining them on stage are musicians Ian Ross and James Gow, who weave into the narrative an original soundscape ranging from the sultriness of a Parisian cafe to the rousing traditions of Eastern European Jewish Klezmer music.

It’s an intimate combination that soars from the start; Antolin and Brisson dramatically look the part and their voices harmonise exquisitely. Brisson’s voice is particularly striking as she leads their paean to the transcending power of love and art. Marc makes a name for himself in modernist Paris, but returns to Vitebsk in 1914 to marry Bella in a traditionally Jewish ceremony that, staged with intoxicating song, dance and specially-adapted wedding chairs, suggests a whirling hall full of guests.

All of Kneehigh’s inventiveness is present in the couple’s ‘milkmoon’ (a honeymoon blessed with cheap and readily available milk) filled with the colourful animals of Marc’s paintings. And there is a memory to revisit, of Bella surprising Marc with flowers in his room for his birthday. In a set made up of disorienting slopes and angles, Antolin and Brisson move together with a dynamic and physical fluidity that refuses to acknowledge any hard edges – holding onto ropes and leaning in, weaving through Sophia Clist’s timber-framed set. Their chemistry is entrancing and Malcolm Rippeth’s stunning lighting design reflects the many colours and shades of their relationship.

But the Chagalls are living through turbulent times of war and revolution. They argue in their hardship and, although blessed with a daughter, often have differing priorities. The music becomes an elegy to the devastating and needless losses of their generation – of their Jewish homeland Vitebsk and its many inhabitants.

Other characters are created by Ross and Gow, by Antolin and Brisson acting with themselves and using puppets, balloons and canvases. But the presence of others is fleeting; it might round out the narrative if roles such as Bella’s brother were further developed, but ultimately this is a story that belongs to the Chagalls.

Although there are occasional lapses of pace that could be tightened, this is a gloriously mesmerising, romantic and joyous production that will ultimately break your heart. A wonderful farewell from Rice, it’s a fitting part of Bristol Old Vic’s celebrations and up there with Kneehigh’s best.