Isobel Blackthorn was born in London but received her doctorate in Western Esotericism from the University of Western Sydney in 2006. She's the author of Asylum and The Drago Tree, both published by Canberra-based Odyssey Books in 2015.

Her latest novel A Perfect Square - part meditation on creativity, part literary thriller - is certainly ambitious in scope. Telling the story of two sets of mothers and daughters separated by thousands of miles, it encompasses the artistry of painters and musicians, their personal relationships and struggles to find through art a healing balm to overcome the ills of the past. 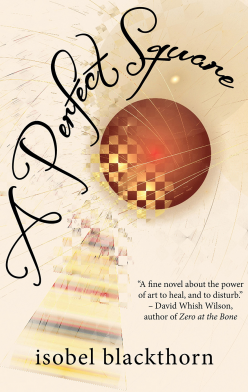 When fledgling pianist and composer Ginny Smith moves back into her mother's house in Sassafras, east of Melbourne, her return is not entirely welcomed by reclusive artist Harriet. The two have long shared an uneasy relationship; centred around the absence of Ginny's father, there's an enigmatic void that Harriet is reluctant to discuss.

Nevertheless, determined to make something of their predicament and provide her daughter with direction, Harriet proposes a creative collaboration; an exhibition of art and music, themed around - one of her many unconventional obsessions - the phases of the moon. Ginny agrees reluctantly, to find to her surprise that it is she, rather than her mother, who is able to tap more easily into the wellspring of inspiration.

Meanwhile, halfway across the world on the moors of Devon, Judith, another mother and artist, reflects on her troubled relationship with her daughter Madeleine, as her own prodigal returns to the fold. It's the mysterious connection between these two fragmented, distant families that lies at the bleak heart of this story, a thriller that will take the full course of the novel to unfold.

It's a complex, intriguing premise in a book that can be read on many levels; most insightfully, for me, as an examination of the process of creativity and true nature of art. This brings with it a typical level of artistic self-absorption that can render the main characters obtuse in their internal monologues. It's a realism that makes them difficult to empathise with at times; Ginny, in particular, wallows in the feeling that her mother has ruined her life, while the synaesthesic, eccentrically intellectual Harriet becomes a fascinating but difficult puzzle to piece together.

As a literary thriller, this novel holds a great promise that it doesn't always quite manage to deliver; the pacing is uneven, starting slowly and leaving too much of Ginny's father and his dark associations to be unveiled at the end, with few clues along the way. Yet, despite this, A Perfect Square proves to be an evocative and unusual read; on the one hand charting creative depths and exploring alternative philosophies, on the other dissecting the often dysfunctional but still indestructable bonds between mothers and their daughters.

A Perfect Square will be published by Odyssey Books on 29th August 2016. Many thanks to Odyssey for my review copy.
Posted by Claire Thinking at 22:52