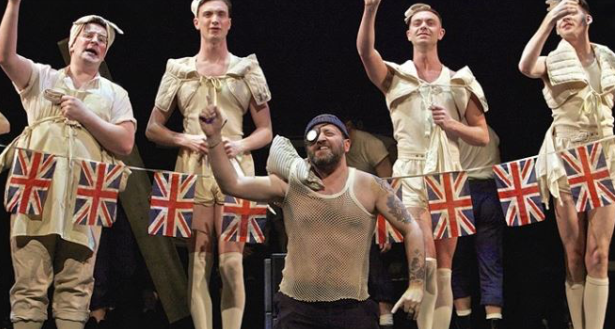 Sasha Regan’s all-male take on Gilbert & Sullivan’s Victorian classic H.M.S. Pinafore was originally staged at Southwark’s Union Theatre over two years ago, but feels just as pin-sharp in this 2016 tour as when it first set sail.

Based below decks in a Second World War battleship, sailors lounge on metal-framed bunk beds with little in the way of distraction. To occupy themselves, they begin performing one of their favourite comic operas and H.M.S Pinafore is reborn in a version teeming with vitality, imagination and breath-taking vocal arrangements.

All the infectious humour and rollicking silliness associated with this tale of mismatched love on the high seas, between common sailor Ralph Rackstraw (Tom Senior) and Captain’s daughter Josephine (Ben Irish), is here. Mattresses are dragged off beds to facilitate an opening display of gymnastics, while a stack of metal boxes is enough for First Lord Sir Joseph Porter, played with great little man pomposity by Michael Burgen, to elevate himself above the crowd in an energetic rendition of When I Was A Lad.

In between the heightened fun and laddishness of the chorus – a company of cooped-up sailors letting off steam – it’s surprising to find moments of genuine pathos. The duet Refrain, Audacious Tar between our handsome, erudite hero Ralph and the lissom Josephine captures all the intense desire and anguish of a love disallowed by society. Then Irish expresses the dilemma of Josephine’s choice between her duty to marry Sir Joseph and love for Ralph with heart-rending tenderness in his exquisitely sung The Hours Creep on Apace.

With the minimum of costume changes – lifejackets, netting and different coloured shorts – members of the crew seamlessly inhabit all the male and female roles. David McKechnie creates a coquettish, strong-voiced Buttercup from a tool-belt of cloths while James Waud becomes the dastardly hunchback Dick Deadeye with the aid of a doubled-up pillow. Rope is used to great effect to recreate both the sea and the sides of the ship, and torches illuminate the scurrying mischievousness of the nocturne Carefully on Tiptoe Stealing.

There may be a simple piano accompaniment, but this H.M.S. Pinafore couldn’t be further from a typical am dram performance. In its pared-back, innovative staging it moves on with great pace. Seemingly spontaneous frivolity is built on solid foundations; movement and dancing tightly choreographed by Lizzi Gee and soaring harmonies under the musical direction of Richard Bates.

We may be getting used to Regan’s various all-male reinventions of Gilbert & Sullivan, following The Pirates of Penzance last year, but she once again succeeds in bringing a fresh twist to the work for a contemporary audience. Whatever your opinion of the Savoy Operas up to now, this outrageously entertaining version of H.M.S. Pinafore is enough to make you think again.