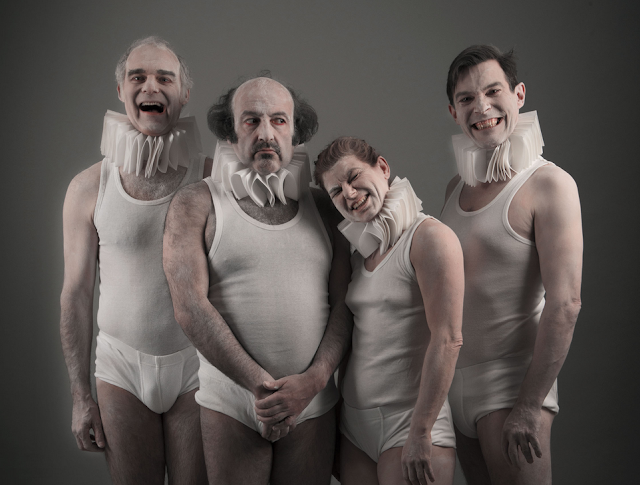 First Mayfest brought us Dead Centre’s riff on Chekhov, now physical comedians Spymonkey introduce their take on Shakespeare – specifically the 75 deaths (counting the black ill-favoured fly in Titus Andronicus) performed onstage in his plays. Directed by Tim Crouch, it’s a unique examination of mortality that – literally – buzzes with energy, played first and foremost for laughs with the hint of a more serious endeavour running beneath.

Death is here in its many different forms; from the bloodbath of Titus with the characters eagerly clambering into a man-sized mincer, to Richard III accompanied by techno music and frenzied horses in gas masks. In between there’s Cleopatra festooned in asps and Cinna the Poet’s fiery demise in Julius Caesar as one tiny newspaper puppet at the mercy of others.

Yet, all life is here as well; the outrageous buffoonery is held together by four performers each with their own agenda. Toby Park, their intellectual leader, is out to make art that will shock the audience from its well-fed, bourgeois complacency while Stephan Kreiss insists on slapstick and joking around. Behind the scenes, he’s intent on declaring his love for Petra Massey, but her main concern is to make sure Ophelia’s death is included even though, technically, it happens offstage. And Aitor Basauri, in Elizabethan ruff and huge comedy codpiece, takes on the full clown’s persona – until confronted by an animation of the long-dead Bard, who instructs him in becoming a true Shakespearean actor by standing with his legs apart, pointing, spitting and rolling his ‘r’s.

Action is captured with live-feed projections from a hand-held video camera, frequently tracking the progress of Titus’ black fly-on-a-stick as it crawls into the noses and mouths of the deceased. Lucy Bradridge’s set is sparse and practical; a supermarket warehouse vibe with enough plastic sheeting to contain all the mess. Meanwhile, deaths are detailed on an overhead display and counted down at the side of the stage by a silver-haired lady, sitting and knitting with all the insouciance of Madame Defarge at the guillotine.

Here and there, it could do with a little tightening; necessarily episodic, there’s an occasional lull between one death’s crescendo and the next. But those ludicrously silly high-points just keep on coming; from Macbeth in yellow plastic kilts (and nothing underneath) to the carnage of Hamlet’s final scene including an inflatable clown costume. There are enough references from the traditional to the post-modern to keep theatre geeks happy, but it’s equally accessible if your Shakespearean knowledge is incomplete. Death, after all, is the one thing that unites us all; encapsulated here in the unexpectedly poignant demise of that pesky ill-favoured fly.