The first of Ragnar Jónasson's Dark Iceland novels, Snowblind introduces rookie police officer Ari Thór Arason in his posting to the isolated northern fishing town of Siglufjördur; a place where - belying its scenic appearance - desperate deeds are happening. Now Nightblind, the second of the series to be published in English by Orenda Books and again translated from the Icelandic by Quentin Bates, picks up his story some five years later. 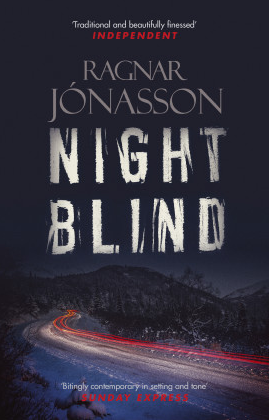 Ari Thór has a new boss, Herjólfur, a man who is still a stranger to him. One thing he does know, though, is that Herjólfur has taken the inspector's job he wanted, the one he applied for when his old boss, Tómas, moved south. Since Snowblind, Ari Thór has been reunited with his girlfriend Kristin but, although they now have a ten-month-old son, things seem far from rosy on the home front. When Herjólfur is blasted by a shotgun one night in an abandoned house on the edge of Siglufjördur and Tómas returns, Ari Thor must step away from his own domestic problems to investigate what is likely to become a murder case.

Much may have changed in Siglufjördur since Snowblind but still it's good to be back; Jónasson recaptures all of its evocative sense of place. A second tunnel through the mountains has opened the town to an influx of visitors, not to mention southerners buying up holiday homes. The story is enmeshed in local politics; there's a new mayor, an ambitious outsider with something to hide and an assistant who's running from her past. Winter claustrophobia has been replaced by a foreshadowing autumnal bleakness. Once again, Siglufjördur emerges as a town riven with tension beneath a serene exterior and, all too often, the source of conflict is uncomfortably close to home.

As before, there's a second narrative interwoven through the book; this time someone being held in a psychiatric ward in Reykjavik, their identity a mystery but their story the key to unlocking the source of the crime. In drawing these threads together, Jónasson's grip is never less than secure; he knows his characters well now and moves them with precision towards a satisfying, but unsettling, ending. One where many secrets are resolved but others still lurk under the surface, ready to strike again.

Nightblind is published in the UK by Orenda Books: thanks to Karen for my review copy.
Posted by Claire Thinking at 01:53