Theatre Review: Lord of the Flies at the Theatre Royal, Bath 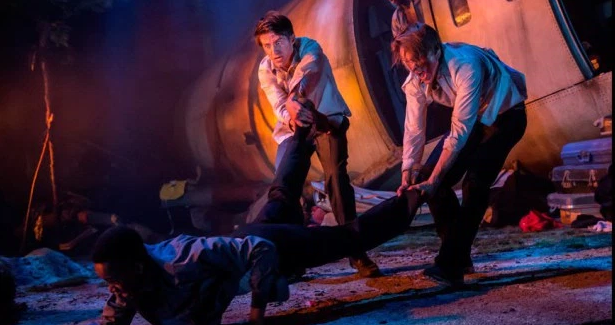 Following its sell-out tour of To Kill a Mockingbird in 2015, this season Regent’s Park Theatre brings another 20th Century classic, Lord of the Flies, to Bath.

This retelling of William Golding’s allegorical novel, of a group of British schoolboys reverting to savagery when marooned on a jungle island, is based on the 1992 stage adaptation by Nigel Williams. Here the plane crash they survive is updated to being that of a modern passenger jet; contemporary cultural references include the newly-formed group posing with a selfie-stick and lamenting the island’s lack of 3G reception.

Jon Bausor’s stunning set, featuring a severed fuselage strewn about with the luggage of the perished, has immediate visual impact in the wake of all-too-familiar TV images of terrorist atrocities. Yet the story at the centre is as ageless as ever; a roadmap of the breakdown of civilised western values as the boys are left to their own devices. At first agreeing on a basic structure and rules for their survival and rescue, they quickly divide into warring factions capable of committing acts of the most shocking and merciless brutality as the constraints of society corrode.

Luke Ward-Wilkinson is a fundamentally decent and likeable Ralph; democratically elected as the group’s leader and initially befriending the bespectacled and socially isolated Piggy (Anthony Roberts), he is nevertheless capable of joining in Piggy’s taunting by Freddie Watkins’ cruelly casual Jack and his entourage of distinctly unangelic choirboys. Ralph and Jack’s growing enmity is palpable; as Jack’s hunters acquire sharpened sticks and war paint redolent of English football hooligans, other standout performances include Matthew Castle as the already-thuggish Roger and young Benedict Barker as Perceval, sole representative of the island’s population of ‘littluns’.

Timothy Sheader’s direction combines naturalistic performance with ritualistic movement; there are compelling elements of dance and physical theatre during the fighting, hunting and slaughter – with action slowed at critical moments. The set’s various levels are used to full effect, as the plane’s tail fin is clambered over to reach the mountain-top inhabited by the elusive Beast and the front of stage slopes down as a sea-shore hideaway.

Nick Powell’s original soundscape of ethereal choristers is a chilling counterpoint to the anarchy playing out; just occasionally, it feels as though the boys’ chanting doesn’t quite fill the auditorium as it should. In the magical summer outdoor setting of Regent’s Park, the theatre must have seemed like an island in itself; transferring this atmosphere to a more conventional proscenium arch is a challenge further hampered on press night by a technical hitch leading to an absence of fire in the climactic final scenes.

The terrifying violence and urgency of Golding’s original is still present, however; a telling contrast to the rows of well-behaved schoolchildren in the audience. In its updating, this production seems less a reflection of the brutality of past wars, more a reminder of the fragile veneer of civilisation that binds us today and all the more prescient for that.

Posted by Claire Thinking at 18:21