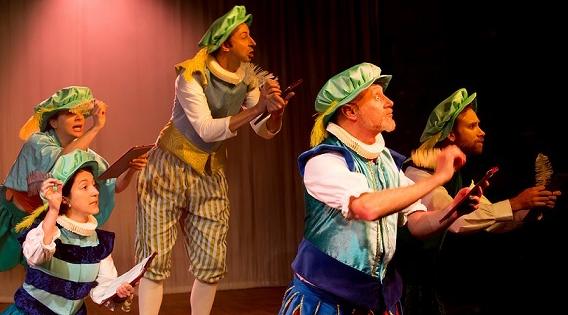 The blank canvas of the Factory Theatre is transformed into an enchanted kingdom of leafy woods, secret lakes and flower-covered castle walls for the Tobacco Factory’s new Christmas show The Light Princess, in association with Peepolykus.

George MacDonald’s 1864 fairy tale of a princess cursed with having no gravitational pull to tether her to earth was ambitiously staged at the National Theatre just two years ago, with music by Tori Amos. This fresh adaptation opens with a distinctive new score from Verity Standen – whose a cappella piece Mmm Hmmm made such an impact in the Brewery Theatre – as Court Conductor, leading the cast in funny and mesmerising song.

The free-spirited Princess, infused with exuberant playfulness by Suzanne Ahmet, can be blown off course by the tiniest air current, which makes her terrestrial relationships hard to manage. Along with her lightness of being, she has acquired a lightness of mind at odds with the King’s rigid approach to courtly life.

Flying around the intimate Factory Theatre is no easy task, but director John Nicholson’s inventive reimagining has Ahmet swinging around pillars with hand-held rope, playing with physical theatre, magical stick puppetry and shadow. By accident, the Princess discovers the attraction of gravity works when she’s swimming in water; there’s a lovely moment with the lake’s surface represented by a simple stretch of Sellotape, before the plot takes on a delightfully wet and messy dimension.

The Princess makes friends with a serious Prince (Richard Holt) in search of a royal bride, but also attracts the attention of her evil Aunt (Julie Black) – source of the original curse – who orders her witchy intern to drain the lake so she can take over the kingdom.

Comedic highlights are provided by Rew Lowe, clambering down unnecessary trapdoors as he alternates various roles including the Prince’s Bristolian horse, and Amalia Vitale in her guises as French thinker Humdrum and plucky intern Lauren. Their confidence grows as the performance progresses; clowning, interacting with the audience and gleefully overcoming missing props.

Elsewhere, some characterisation could be pushed a little further and the story-telling becomes obscured and lacking in tension towards the end. The intrinsic problem of a heroine not able to feel compassion, meaning the audience doesn’t experience it either, isn’t overcome until it’s too late.

It may be missing some deeper emotions, but with an endearing mix of haunting music, inventiveness and tomfoolery, The Light Princess still provides a joyously entertaining diversion for all the family this Christmas. It’s a charming and riotous dollop of silliness that sets just the right tone for the festive season.