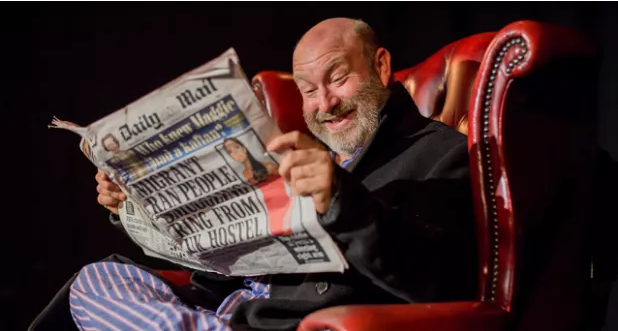 Much-loved comedy duo Living Spit is back in the Brewery Theatre with its own particular take on that perennial Dickens classic A Christmas Carol. Such is the extent of Bristol’s appreciation for Stuart Mcloughlin and Howard Coggins that most of the run is already sold out, with extra shows having been added.

It isn’t difficult to see why. Living Spit’s particular brand of adult-style Horrible Histories silliness has previously tackled subjects as diverse as Elizabeth I and Adolf Hitler with sharp-witted verve. The two actors are great at storytelling and playing themselves alongside multiple characters, so it seems A Christmas Carol should be right up their street.

And indeed, there are moments of guffaw-worthy delight. The entrance of the actor Howard Coggins is a highlight as he transforms into the pyjama clad, Daily Mail reading Ebenezer Scrooge railing against migrants with plenty of Bah Humbugs thrown in. From thereon in, it’s a largely traditional retelling of the story, featuring the ghosts of Marley and Christmases Past, Present (taken very literally) and Future, with a contemporary twist. There’s a good old debate about the talents of Pierce Brosnan and his untrained singing voice in Mama Mia!, while a chugger gets short shrift as he accosts Scrooge in the street. Stu takes every opportunity to don a variety of dresses and wigs and the duo’s well-sung harmonies make a reappearance in trademark songs such as Howard’s Interval Song and the funny but surprisingly poignant ballad Let’s Have Pity on Uncle Scrooge.

In between, though, there are some meandering scenes which could do with tightening to lift this piece to the same level as other Living Spit productions. Scrooge’s encounter with his first girlfriend Angharad at Fezziwig’s nightclub is endearing but overlong and doesn’t really go anywhere. Some of the dialogue isn’t as crisp and sparkling as usual and the appearance of each of the ghosts and recreation of minor characters in the form of Barbie dolls and teddies – despite a fantastically Pythonesque Christmas meal for the Cratchit family – is oddly lacking in comedic or dramatic tension.

The ending is satisfying, though, as the audience gets the chance to join in an enjoyably crass rendition of Hymn 1971 and Scrooge realises the error of his ways and sets about putting things right with an inflatable turkey. Living Spit’s A Christmas Carol is still a Christmas cracker full of festive fun, sure to please the fans, but it could be so much more with some judicious tweaking.

Posted by Claire Thinking at 11:37