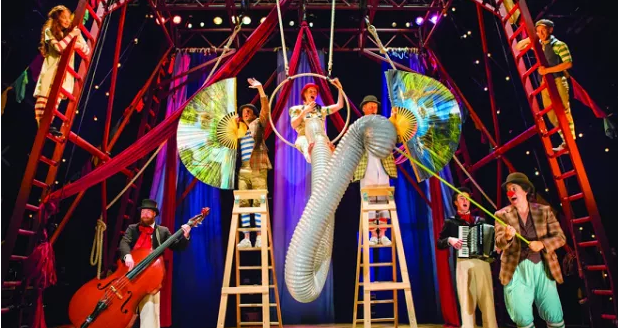 It’s not easy touring a family show in chilly January, with pantomime season at an end and the tinsel packed away for another year. But this doesn’t stop families of all ages – and mothers and daughters in particular – from enthusiastically turning out in the dark and cold for the opening night of Hetty Feather at Bath’s Theatre Royal. Emma Reeves’ adaptation of best-selling author Jacqueline Wilson’s novel – already a West End hit – promises an inviting blend of original music, circus skills and uplifting storytelling with a fearless role model at its heart.

Think Tracy Beaker transported back to the Victorian era: Hetty Feather begins with our eponymous heroine re-imagining her own abandonment at the foundling hospital when only a few days old. Of course, her mother only handed her over in desperation and is longing to come back and care for her; of course, she gave her a name more thrilling than Hetty – one that reflects the dazzling blue of her eyes. Sally Cookson’s direction takes this longing and cradles it for us, with more than a few nods to her devised production of Jane Eyre, shortly to return to Bristol Old Vic after a run at the National Theatre.

Hetty is fortunate in being well cared for her in her early years by a loving foster family; when the circus comes to town, she’s captivated by its exotic glamour. Then, her life changes for the worse; forced to return to the foundling hospital to begin her education, she falls under the disciplinarian auspices of the stern and humourless Matron Bottomly.

The music is enthralling throughout. The fluidity of the storytelling is made possible by Benji Bower’s original composition and the show’s opening is enhanced by the most charming of warm-up acts: musicians Seamas H Carey and Luke Potter.

No less impressive are the acrobatic circus skills displayed by the ensemble, as they seamlessly negotiate the set’s collection of ropes, ribbons and hoops, scaling ladders and clambering over scaffolds with spectacular ease. There are magical moments as Hetty’s parents’ romance is recreated in aerial form, and lovely comic touches, too; the scene with Madame Adeline’s circus horses is one of unbridled delight.

Phoebe Thomas captivates as plucky and adventurous Hetty, learning the hard-knock lessons of life and finding happiness in unexpected quarters. She is ably supported by Matt Costain playing Matron Bottomly and Hetty’s foster brother Jem, as well as a Sarah Goddard in the roles of Peg, her affectionate foster-mother and Ida, the foundling hospital’s cook.

Hetty Feather brings circus energy and theatrical invention to Jacqueline Wilson’s original novel, without losing any of its warm heart in the process. It’s an engaging and beguiling story well told, especially thrilling for Wilson’s legion of fans, but living up to its promise in appealing to children and adults of all ages.

Posted by Claire Thinking at 18:28