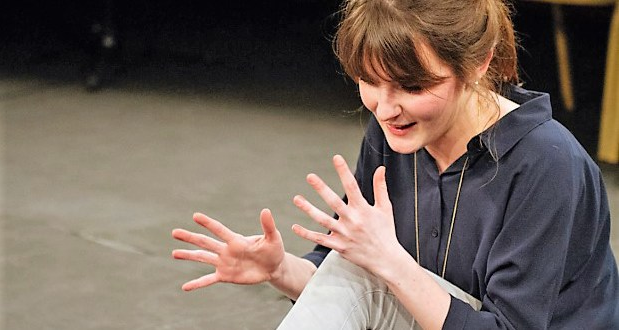 Imagine being limited to speaking just 140 words a day; that’s exactly what happens to Bernadette and Oliver in this accomplished production from the University of Warwick’s recently-formed Walrus Theatre company. Words – tumbling and jostling with all the force of a white-knuckle ride – are the essence of this bare stage two-hander from the pen of Sam Steiner. Apparently, an average person uses 123,205,750 of them in a lifetime; here their loss is all the more starkly felt as they’re ruthlessly legislated away.

Bernadette (Beth Holmes) is a trainee lawyer and Oliver (Euan Kitson) a musician and political activist when they meet in a pet cemetery for the funeral of a cat. At first, they’re uninhibited, able to use all the free-flowing words they want. Bernadette questions Oliver’s relationship with his ex-girlfriend, while her profession obviously rankles with him. But, as their relationship deepens, the shadow of the Hush Laws looms over them, limiting their speech. Bernadette – practical, career-focused and, like so many of us, in denial that it will ever happen – doesn’t foresee the devastating consequences. Idealistic Oliver senses danger and goes on protest marches that ultimately prove useless. As the Orwellian laws are introduced, the couple rush to spill out their last uninhibited words of freedom, an ‘exorcism’ that raises more questions than it has time to answer.

Holmes and Kitson are engaging and likeable as they circle the stage and their two unadorned microphones, flexing together and apart in moves tightly choreographed by director Ed Madden to sometimes reflect, sometimes challenge each other. As the timeline zips back and forth – one minute they’ve just met, the next they’re each announcing the number of words they have left over from their day – we see their relationship move from infatuation and love through to boredom and disillusionment. Without the adequate number of words, they struggle to express themselves, to resolve issues and move on.

Through this everyday couple’s on-stage chemistry – polished now by repeated performance – the focus of the personal convincingly illuminates the social, political and philosophical consequences of such draconian limits. Bernadette, when in court, is allowed a special dispensation of additional words, dividing society into verbal ‘haves’ and ‘have-nots’. When each word needs to count, its meaning matters. A qualifier like ‘really’ becomes thoughtless and extravagant, two words like ‘love you’ run together to make a saving. And yet, one of the most endearing moments is when the couple spontaneously bursts into a gloriously wasteful rendition of the theme from The Fresh Prince of Bel Air.

A show honed to great acclaim on the tiny stages of Edinburgh is in danger of wallowing in the relative size of the Factory Theatre, but still it works. Despite an ending that tries to wrap things up a little too neatly, it’s a clever and incisive exploration of free speech and the power of words.

Posted by Claire Thinking at 12:56