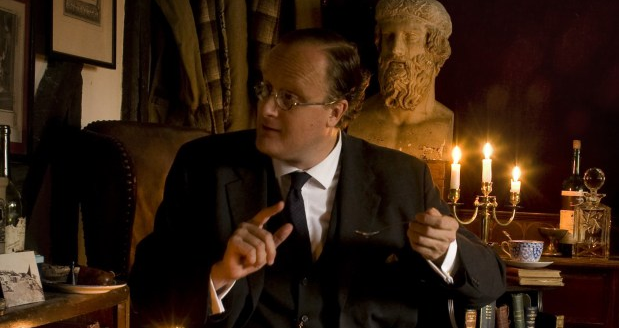 In his one-man storytelling, Parry is the very epitome of the antiquarian scholar. He steps effortlessly out from the Factory Theatre darkness, straight into James’ shoes; sitting in a wing-back chair by candlelight, sipping whisky poured from a decanter and regaling us as though we are his old chums from King’s College, Cambridge.

His first story, The Ash Tree, is a tale of revenge through the generations. A grand old country house, Castringham Hall in Suffolk, is inherited by Sir Richard Fell, who finds that the house has been cursed since his grandfather, Sir Matthew, condemned a woman to death for witchcraft. Sir Richard nevertheless decides to sleep in the very bedroom where his ancestor died a painful death, only to find he is haunted by a presence inside the ash tree outside his bedroom window.

While rarely moving out of his chair, Parry’s delivery doesn’t miss a beat. He’s lively and fluent, letting his audience fill in the blanks; easing us into moments of laughter, before heightening the tension and making us jump. Lighting and sound effects are minimal; Parry uses simple props like a tin box full of papers to create his startling percussion. In blowing out all but one candle and cleverly recreating Sir Richard’s night of terror, Parry lays bare with shivering intensity the hideous secrets forcibly given up by the tree.

Parry’s second story is one of M R James’ most well-known; Oh, Whistle, and I’ll Come to You, My Lad; another tale where nocturnal terror looms large. On the Suffolk coast, Professor Parkins is investigating a preceptory, or meeting place, thought to be attributed to the Knights Templar. There he unearths a whistle that bears a Latin inscription translated as ‘Who is this who is coming?’ Reasoning that the best way to find out is to blow the whistle, Parkins unwittingly unleashes supernatural forces beyond his wildest imaginings.

This is another masterful performance by Parry, who has proved so popular with Bristol audiences that an additional date was added to his schedule. However, the two stories in Oh Whistle… while both absorbing individually, perhaps don’t provide enough of a contrast with each other to sustain the audience after the interval.

Nevertheless, Parry is well worth catching for his characterful performance and the consistent quality of his story-telling; testament, if it were needed, to the universal appeal of a well-told, pleasingly spine-tingling ghost story.

Posted by Claire Thinking at 19:34