Theatre Review: Forever Yours, Mary-Lou at the Ustinov Studio, Bath 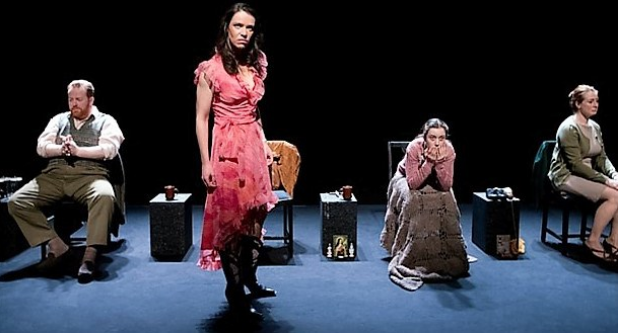 The second in the Ustinov’s season of French-Canadian drama, Forever Yours, Mary-Lou (À toi, pour toujours, ta Marie-Lou) comes to Bath with a substantial pedigree already under its belt. Written in 1970 in the French working class vernacular of Montreal, Michel Tremblay’s tragedy of a dysfunctional family haunted by its past is today widely considered a masterpiece.

That’s not to say it has always been so well received in translation, with English language versions often criticised for failing to capture the viciously earthy cadences and embattled spirit of the piece. So, it’s surely nothing less than a stroke of genius for Michael West, long time collaborator with Ireland’s Corn Exchange, to transpose the setting for his new translation to downtrodden Dublin, where its volcanic mix of Catholic angst and social deprivation flows into a ready-carved niche.

Sisters Carmen (Caoilfhionn Dunne) and Mandy (Amy McAllister) are seated centre stage, in an expressively non-naturalistic setting against a darkened background, talking candidly about their past life growing up with their parents. And yet, their father Liam and mother Mary-Louise (Paul Loughran and Caitriona Ni Mhurchu) are still sitting either side of them. Distinguished only by subtly different lighting, they’re carrying on the unsparing conversation of one morning ten years ago over the heads of their two daughters.

This static positioning of all four cast members side-by-side in a row brings the evenly-matched rhythm of their voices to the fore. Conversations past and present intermingle and overlap, sometimes fragmented, sometimes Greek chorus: sister heaping accusations upon sister, mother upon father, husband upon wife. Loughran’s Liam simmers – always on the edge – with a volatile mix of disappointment and rage, while Mary-Louise seems determined through her own disillusionment only to provoke him further – until, that is, we realise the anguish behind her spite.

Mostly it makes for uneasy listening; shattered fragments gouging and wounding the flesh, reinforcing the scar tissue of year upon year of perceived wrongs for both generations. McAllister’s quietly resolute Mandy, convinced her father was a monster, like her mother before her has turned her face away from his memory and found solace in religion. Dunne’s brilliantly realised Carmen, however, is having none of it. She alone offers an isolated glimmer of hope in breaking the cycle of despair, taking up the country and western circuit and refusing to countenance her sister’s accusations that she’s a whore. Mary-Louise, she alleges, ‘spent her whole life on her knees so she wouldn’t have to get on her back’, while Liam battled many-headed demons: day-to-day drudgery, creeping insanity and constant rejection from his wife.

Laurence Boswell’s direction grasps the rhythm of the words early on and keeps their pace flowing as tragedy unfolds. Polly Sullivan’s design largely avoids the temptation of unnecessary distractions; only at the end comes a welcome spark of redemption among the greater decay. So Beckettian is this paean to the failure of religious and social constructs to satisfy real human needs, so wrought from the depths of despair and bitterest laughter that, by the end you need to remind yourself Forever Yours, Mary-Lou really was forged not in the mean streets of Dublin but the political cauldron of 20th Century Quebec.

Posted by Claire Thinking at 20:59