The Invisible Guardian is the first thriller in Dolores Redondo's Baztán trilogy, set in the densely wooded valleys and remote rural communities of the Basque Country and neighbouring Navarra in Spain. Translated from the Spanish by Isabelle Kaufeler, it crackles with the atmosphere of a region where traditional superstitions still find their way into everyday life. 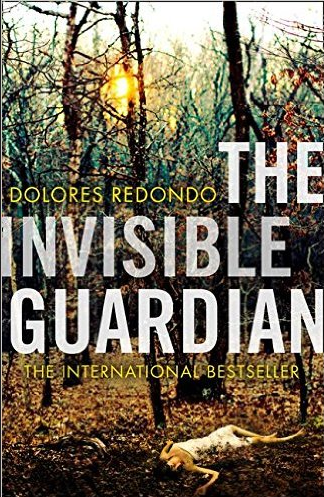 The story is eerily gripping from the first page, as a young girl's body is discovered in a desolate forest:

Ainhoa Elizasu was the second victim of the basajaun, although the press were yet to coin that name for him. That came later, when it emerged that animal hairs, scraps of skin and unidentifiable tracks had been found around the bodies, along with evidence of some kind of macabre purification rite. With their torn clothes, their private parts shaved and their upturned hands, the bodies of those girls, almost still children, seemed to have been marked by a malign force, as old as the earth.

As Inspector Amaia Salazar is put in charge of the investigation, she must return to Elizondo, the village where she was born. But despite being a rising star of the local police force and happily married to her American husband James, Amaia has a dark past. In moving back to Elizondo to pursue a serial killer that the locals believe to be a basajaun - a woodland being with supernatural powers - she also has to face the resurfacing of her own childhood demons:


leading her to wonder whether she had succumbed to what murder investigators fear most: that the horror she faced on a daily basis had broken free of the dark place where it ought to remain locked away and had taken over her life, gradually making her into one of those police officers with no private life, left desolate and isolated in the knowledge that they are responsible for letting the evil break through the barriers and wash everything away.

This is a novel that combines the ancient and modern; local traditions of witches, evil spirits and Amaia's Aunt Engrasi divining the future through Tarot cards, contrasting with the contemporary policing techniques Amaia learnt in her time in America and the scientific laboratory analysis that is the backbone of her investigation.

With its graphic descriptions of the ritualised killing and ensuing autopsies of young girls, their bodies described as the 'sole subject of a murderer's work of art', The Invisible Guardian is certainly not for the faint-hearted. Although fiction, it makes for uncomfortable and voyeuristic reading at times - at least, if you're as much of a wimp as me. Yet, despite the brutality, it's a story that draws you in with its powerful sense of place; as you read, you can almost feel the claustrophobic chill of winter's mist closing in around you.

Dolores Redondo was born in the Basque Country's San Sebastian (Donostia) and, in writing of the country she knows intimately, has produced a hauntingly original novel with an intriguing protagonist who must eventually question every aspect of her past. Her characterisation is always empathetic and the conflicts Amaia faces in her entangled personal and professional life, alongside the simmering resentments she encounters at every turn, are never less than compelling.

As the story hurtles towards its conclusion, there are surprising elements of magical realism that make you feel as though you might have stumbled into a novel by Gabriel García Márquez or Carlos Ruiz Zafon. Yet, in the landscape of which she writes - beautiful by day but menacing and isolated by night - these almost feverish happenings still feel authentic.

Redondo draws all the threads of her narrative together into a satisfying conclusion, but one that leaves room for the English translation of the second in the trilogy, The Legacy of Bones, to provide the next instalment of Amaia Salazar's darkly captivating story later on this year.

The Invisible Guardian by Dolores Redondo is published in the UK by HarperCollins. Many thanks to them for my review copy.

Posted by Claire Thinking at 13:56