This review was originally written for The Reviews Hub 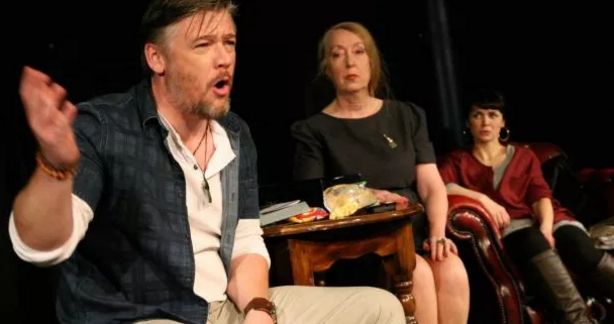 The latest commission in Òran Mór’s A Play, A Pie and A Pint series showcasing new writing is Happy Hour, Anita Vettesse’s funny, poignant and sharply observed exploration of a family floundering in its attempts to re-establish an equilibrium after the death of father and husband Joe.

Gathering together in the family pub to scatter his ashes, each of them has their own baggage. Kay (Hannah Donaldson) was always a daddy’s girl, but she has her alternative therapies and crystals for comfort – and if they don’t work she still has the inhaler and red wine to fall back on. Tom (Stephen McCole) is home from his role as an overseas aid worker – having missed his father’s funeral he’s there to say a final farewell. Meanwhile, their mother, Anne (Anne Lacey), is selling the pub that she and her husband ran for many years. She’s promised the money to her children, but she might be about to change her mind.

Joe’s ashes sit in their midst in a shoebox on the table and you can really feel his presence and absence in this family. Then, talk turns to inheritance and the arguments gather momentum; Kay’s desperation for cash becomes increasingly plain as she alternates between threats and pleading to recruit her brother to her cause. Tom has secrets he wants to reveal at his own pace while Anne sees the opportunity for a new life –although determined not to lose any of the control she held in the old.

Vettesse’s writing is full of promise. Here she delivers a finely nuanced examination of family dynamics at a time of loss and critical change; her frequently barbed dialogue rings true in all its tragicomedy and the audience’s sympathy gradually realigns as perspectives change and each character reveals a little more of themselves. Under Gethin Evans’ direction the pace is fast yet naturalistic, the setting simple and the cast of three delivers its characters with venomous yet touching assurance. The only real question mark is over those ashes; as you fix your gaze on them, it’s impossible not to feel a certain predictability in their outcome from early on.

That said, Happy Hour’s ending, in the face of a pub quiz conundrum, is more than satisfying enough to complete an evening’s entertainment for ticketholders that begins with a pie and a pint; a tasty and refreshing celebration of new one-act plays and an inspiring initiative.

Posted by Claire Thinking at 12:35