Theatre Review: The One That Got Away at the Ustinov Studio, Theatre Royal Bath

This review was originally written for The Reviews Hub 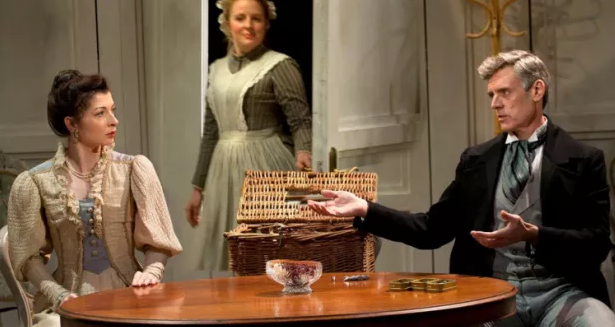 Hot on the heels of Eugène Labiche’s Monsieur Popular, the second of the Ustinov’s classic 19th Century French farces is from the master himself, Georges Feydeau.

In The One That Got Away, Kenneth McLeish’s translation of Feydeau’s 1892 play, Monsieur Chasse!, director Laurence Boswell capitalises on the exaggerated twists and fast-paced physicality that this fantastical tale of thinly-disguised deceit throws up.

Léontine is contentedly sorting out fishing tackle for her husband, Monsieur Duchotel, and evading the attentions of his best friend, the beguiling Dr Moricet. Duchotel is supposedly off on a trip with his old mate Cassagne – but Léontine is alerted to his adulterous duplicity by the unlikely combination of trout and lobster he’s caught in the past – and by Cassagne himself turning up on the doorstep to visit the friend he hasn’t seen for many months.

This sets in train a catalogue of events where nobody is completely innocent but some are guiltier than others; the most unlikely allegiances are formed in a spiral of increasingly desperate and hilarious attempts to save face and preserve the status quo. In Moricet’s newly-rented apartment in Paris’ Rue d’Athenes, propriety is thrown out of the window as Léontine seeks to avenge her husband’s betrayal – only for it to boomerang back in again as she finds it harder to be as improper with Moricet as her husband is being with Madame Cassagne.

The sparkling cast fizzes with energy; Richard Clothier’s Moricet charms, cavorts and implores his way in and out of trouble but meets his match in Frances McNamee as Léontine, whose facial expressions range from flirtatious to outraged and all the way back again in the blink of an eye. Throw in Joe Alessi as her convivial, wandering husband Duchotel and Oscar Batterqham as his amorous but penniless young nephew Gontran – suffering from a bad dose of mistaken identity – and layer upon layer of mayhem ensues. Meanwhile, Victoria Wicks breathes comic life into the role of Madame Latour; her fall from gentility to become the concierge of the apartments, due to the allure of a strong-thighed lion-tamer, is a tale that will linger long in the memory.

The split-second timing and sheer physicality are electric; doors are there for slamming or knocking on relentlessly, closets for hiding in and another man’s trousers for appropriating in an emergency escape from the police. But, despite the pandemonium, the sequence of events is crisp and clear, thanks to Feydeau’s clever writing and a cast of fully-rounded characters who make the improbable appear mirthfully believable.

Much like Feydeau, Polly Sullivan’s opulent set has borrowed from and built upon elements of Labiche’s Monsieur Popular. In The One That Got Away, the cast’s asides to the audience are engaging rather than tedious and the situations arising from the goings on – apart from the occasional cringe-worthy double entendre concerning the state of Duchotel’s rod and anachronistic comments about a woman’s place – are entertainingly relevant to a contemporary audience.

The One That Got Away recalls a world long gone, of Paris during The Belle Epoque; a light-hearted and thrillingly hedonistic delight which, under Boswell’s direction, becomes a masterclass in chaos management, still bringing great fun and frivolity more than a century after it was first conceived.

Posted by Claire Thinking at 12:57

Email ThisBlogThis!Share to TwitterShare to FacebookShare to Pinterest
Labels: Georges Feydeau, The One That Got Away, Theatre Royal Bath, Ustinov Studio