Book Review: A Line of Blood by Ben McPherson

I don't know about you, but sometimes I feel the need for an out-and-out page-turner. A fast-paced, twisting and turning thriller that draws me into reading on until I discover the ending. And while Ben McPherson's A Line of Blood may have a very contemporary north London Finsbury Park setting, a good old-fashioned page-turner it certainly is. 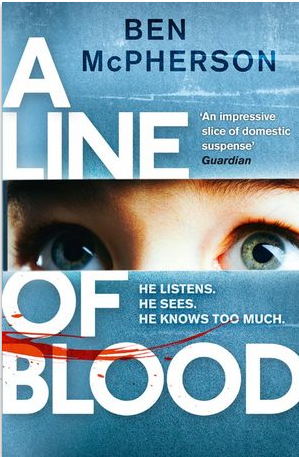 In searching for his errant cat, Alex Mercer stumbles upon his neighbour, dead in the bath. His young son Max is with him and sees much more than he should. What at first looks like a suicide turns into something even darker and, as the police begin to investigate, secrets that have been locked away in closed hearts start tumbling out.

There are the cracks in Alex's tumultuous marriage to Millicent; a shared tragedy in their past they have never truly recovered from. Aspects of Alex's own upbringing also feed into his concern that his own son should not be traumatised by what he's seen. Meanwhile, as the police dredge through the neighbour's past, what they find is increasingly murky and threatens to destroy Alex's family completely:


Millicent was sitting with her head in her hands, tiny against the vast communal table. I sat down beside her; it seemed at first as if she hadn't seen me, as if she were somewhere very private; then she sat up, looked me in the eye, and began to speak.

'I need you to understand that I have never and never would betray you, Alex.'

She hadn't slept. I could see the blood pulsing in her neck, smell the sourness on her breath.

'So I probably need to start with the really bad stuff, and then I can explain - and I hope, I really hope you're going to listen and to understand - how it isn't what it looks like. Because I know it doesn't look so good.'

She reached into her bag and produced a small white envelope; she looked at it for a moment, then handed it to me.

'So this is what the police wanted to discuss with me.'

The protagonists are unreliable and flawed but still credible; their faults explained by the revelations of their pasts. As the life they've created for themselves begins to fracture, Alex and Millicent remain just about likable enough to retain your sympathy. With plenty of twists and shifts the plot cracks on towards an ending that, although visible a little way off, still scores highly on dramatic tension and shock.

Like his character Alex, Ben McPherson grew up in Scotland before working for many years in film and television in London. Indeed, there is a very fluid, filmic quality to this, his debut novel; it seems ripe for adaptation into a gripping screen thriller. If it's jolts and chills you're after, A Line of Blood will have you hooked, but - a word of warning - set aside the time; despite a mountain of other things I should have been doing, I found myself reading the second half of this book in one sitting.

A Line of Blood is published in the UK by HarperCollins; thanks to them for my review copy.
Posted by Claire Thinking at 19:14

Email ThisBlogThis!Share to TwitterShare to FacebookShare to Pinterest
Labels: A Line of Blood, Ben McPherson, HarperCollins