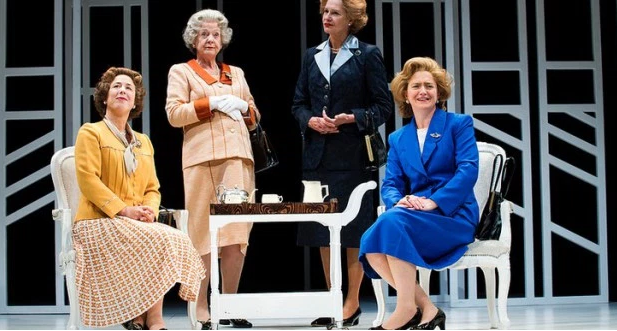 Theatre so often speculates about the Queen’s relationship with her public servants – from Anthony Blunt as her surveyor of pictures in A Question of Attribution to her interviews with successive Prime Ministers in The Audience.

In the Olivier Award-winning Handbagged, now on tour having premiered at London’s Tricycle Theatre in 2014 and transferred to the West End, writer Moira Buffini focuses on Her Majesty’s relationship with Margaret Thatcher, as the grocer’s daughter comes to power in the 1980s.

Each character is played by two actresses – the older Queen and Mrs Thatcher sagely commenting on the relationship of their younger counterparts, addressing each other and their earlier selves. Reminiscent of Alan Bennett talking to himself in The Lady in the Van, it’s a device that offers a huge variety of droll possibilities.

It would be all too easy to slip into comic asides and caricature; the Queen offering tea and cakes at her weekly audiences with her latest Prime Minister, while her older self comments drily on Mrs Thatcher’s lack of humour; Mrs T worrying about balancing the books like the penny-pinching housewife she is at heart and whether their outfits might clash at public events. But Buffini treads a fine line between condemning and condoning her characters, offering instead a witty, poignant and rounded alternative view of the people behind the titles.

Their strong personalities are convincingly assumed by the cast; Kate Fahy nails the older Mrs Thatcher’s accent and imperious mannerisms while Sanchia McCormack defines her initial nervousness at meeting the Queen. Suzie Blake as the older monarch delivers hilarious one-liners with acerbic wit – desperate to find some common ground, Emma Handy’s younger Elizabeth asks Mrs T whether she has any pets; ‘If she’s got a dog, we’ve got a subject’. Sadly, it seems they don’t and the Prime Minister goes on to describe a picnic at Balmoral as ‘more stressful than a Nato summit’.

Indhu Rubasingham’s direction makes the most of the meta-theatre; against a simple yet striking framework of a Union Jack, the Queen and Mrs T spar over their tea cups, while their older selves often comment that, of course, this never happened. Tragic events – the assassination of Lord Mountbatten, the bombing of the Tory party conference – are given due respect and it’s prevented from becoming too much like a history lesson by the Queen hurrying her Prime Minister along and insisting on an interval.

Asif Khan plays everything from palace butler to power-suited Nancy Reagan with panache, interrupting to ensure Mrs T doesn’t gloss over the unsavoury bits – the miners’ strike and the poll tax – while bickering with Richard Teverson, who takes on all the other rôles from Denis Thatcher to Lord Carrington, over who can deliver the best Neil Kinnock.

For all the sharp writing and sheer entertainment value, it’s hard not to wonder about the appeal of this play for those too young to have experienced the phenomenon of Thatcherism first-hand. For those of us who did, however, the era is served up with enough subversively nostalgic bite to demolish a trolley full of scones – by two forces of nature armed with handbags and sensible court shoes.

Posted by Claire Thinking at 16:40