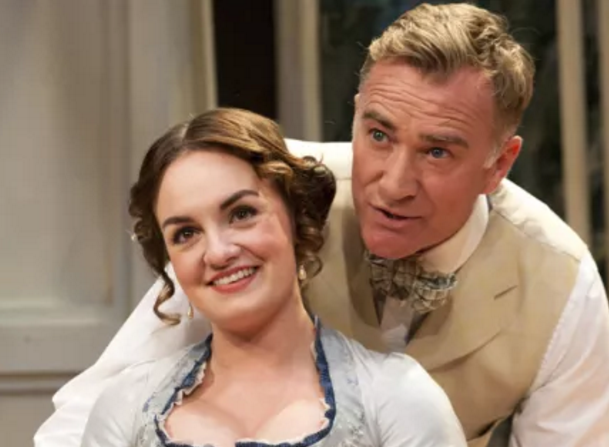 In 19th Century Paris, 47-year-old Celimare is preparing to marry Emma, his 18-year-old bride. Unlike Emma, however, Celimare has a history; his past holds no shortage of married lovers and, to make sure these relationships flourished, he befriended their husbands, too. Now, he’s managed to jettison the lovers, one way or another, but their husbands are a different matter. Impervious to what’s been going on under their noses, they still regard Celimare as their best friend; the man who loves to play dominoes night after night and is never happier than when sorting out their crises with the servants.

Raymond Coulthard strikes the right sort of note as Celimare; self-possessed, twinkling and charmingly louche, it’s easy to see what the women are falling for. At first, Celimare’s habit of never passing up the opportunity to dabble in double-entendre and his knowing comments to the audience – letting us in on his secrets – is an inspired bit of fun. Yet, because overused, it becomes tiresome; under Sams’ direction the comic asides turn into full-on addresses, slowing the action and making Celimare appear less hapless victim of circumstance, more scheming con man in control of events.

Gregory Gudgeon and Howard Ward as the cuckolded husbands Vernouillet and Bocardon form a spirited and contrasting duo that, along with Celimare’s new parents-in-law – convincingly played by Nicola Sloane and Iain Mitchell – excels in riotously fast-paced entrances, exits and general door-slamming. Unwittingly, they conspire to ensure that Celimare receives barely a moment’s peace or time alone with his new bride Emma, played by Charlotte Wakefield – who has the difficult task of springing fully-formed into the action the day after her wedding to a man she barely appears to know.

Polly Sullivan’s set morphs easily from opulent drawing room into a dining room paying homage to the Victorian penchant for being surrounded by stuffed creatures while eating. After the interval, the transformation into a country house setting is impressive and complemented by sumptuously detailed 19thCentury French summer fashions.

There are moments of magic; Celimare’s servants Pitois and Adelina (Stephen Matthews and Karoline Gable) are a delight and their singing is particularly effective. Vernouillet’s composition Marriage is Bliss is a hoot and many elements of physical comedy – the passing of messages in Bocardon’s hat, the superb comic timing with the footstool – work well. Yet, overall the piece feels too long and laboured; jokes the audience has already understood are reiterated and become unwieldy without really moving the action forward. Perhaps a contemporary audience has less patience than one from the 1800s, but tightening some scenes and dispensing with the interval (a rarity in a Ustinov production, perhaps only there to accommodate the set change) would result in a crisper, more focused production.

Monsieur Popular is interesting as a work from the writer who inspired comic master Georges Feydeau, but it doesn’t offer any of the heightened and exaggerated reflection of our times that can be found in successfully updated farces like One Man, Two Guvnors. Although it has fine performances and pleasing aspects these never really come together; the piece remains an entertaining but uneven glance back at a different age – charming, amusing but very much bygone.

Posted by Claire Thinking at 16:20