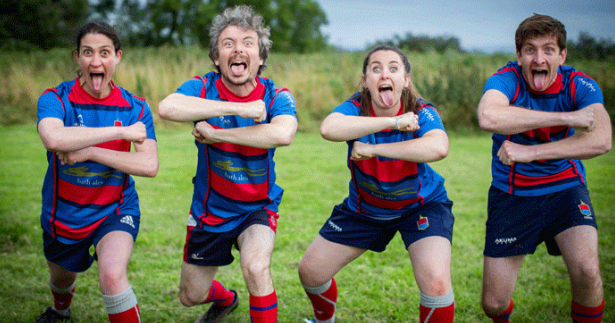 For an endearing evening of rugby-related entertainment, Live Wire Theatre’s Hands Up For Jonny Wilkinson’s Right Boot! is hard to beat.

Yet, although Jonny’s 2003 World Cup-winning drop goal – with the wrong foot – gets a very honourable mention, alongside Jonah Lomu’s destructive four tries against England, and Nelson Mandela’s presentation of South Africa’s first ever World Cup to the Afrikaner Springbok captain, Francois Pienaar, this production really belongs to one unsung hero: Frederick Stanley Jackson.

A Cornish rugby player after the turn of the 20th Century, Jackson tackled many a prejudice head-on; from the amateur Rugby Union committee that frowned on players needing to earn a living from their talent to the New Zealand establishment prohibiting any fraternising with the Maori. Banned from playing for his county on the grounds of professionalism, Jackson re-established himself on the other side of the world, only to find that, despite being called upon to serve his country at war in a tumultuous time of world history and going beyond duty at Gallipoli, he was repeatedly shunned by those in charge.

This deft and historically-informed piece of new writing by Dougie Blaxland is energetically enacted and narrated by just four players; George Williams as Jackson, with Giles Coram, Hannah Douglas and Moira Hunt supplying the chorus and multiple roles in Jackson’s story. Under the lively and fast-paced direction of Shane Morgan, there are many physically astute set pieces to admire, with the old buffers of the Rugby Union rocking from side to side in their condemnation of Jackson’s escapades, plenty of chanting and shirt-swapping and manoeuvres on the playing field culminating in the legendary Haka.

At the centre of this play is a very human story – the love of Jackson for a Maori woman, Horowai (meaning Waterfall). Conjured into existence only as words spoken by Williams, Horowai is distant to us; a turning point amid so much activity that is, in essence, an absence. Although an understandable portrayal of a woman whose race renders her invisible, perhaps her story could be enhanced by slowing down the word-tumbling narrative on occasion and representing her in another of the actors. Her lack of characterisation does prevent real empathy with the couple’s condemned relationship – a union that goes on triumphantly (yet almost as an afterthought) to produce five children, three of whom eventually play rugby for New Zealand themselves.

Nevertheless, these are 70 original minutes (might it be possible to stretch to 80?) that have a great deal going for them, with an acceptable level of audience participation to boot. And the Cornish accents alone deserve mention for being the proper job – not the mid south-western fudge we’ve come to know in lazy TV dramatisations. If you’re not a rugby aficionado, this is a production that still has plenty to offer, but its rich retelling is tailored for a rugby-loving city like Bath – and indeed the rest of the West Country and beyond – in the grip of a home World Cup in 2015.

Posted by Claire Thinking at 19:36