Theatre Review: And Then Come The Nightjars at Bristol Old Vic 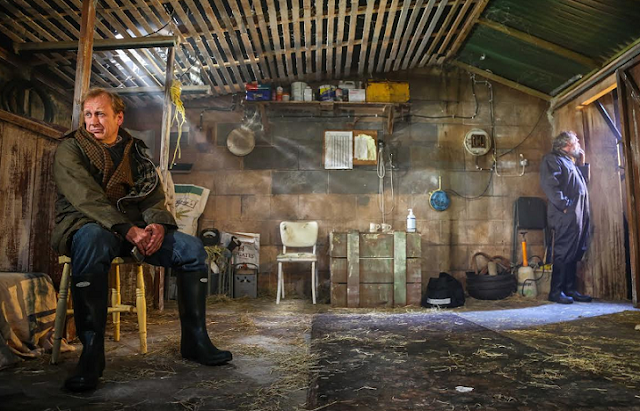 There is a fierce and tender connection to the land threading through And Then Come the Nightjars that might seem reminiscent of Irish influences – from the recently late, great Brian Friel to John Patrick Shanley’s Outside Mullingar. And yet, this original writing from Bea Roberts, developed with Bristol Old Vic Ferment and Theatre503, is set in rural Devon, on a farm with a view of the Tamar. It tells the story of a friendship between two men from differing backgrounds but with common cause, which becomes an elegy for a rural way of life rapidly being outpaced by modernity.

Widower Michael is awaiting the birth of his prize cow Dottie’s calf and Jeffrey is the vet in attendance. Except that Michael doesn’t really need Jeffrey’s help; he’s brought so many calves into the world on his own that he’s running out of royals to name them after, referring to his herd as “my girls”. Jeffrey is really there to escape from an unhappy marriage, but it is 2001 and there are bigger storm clouds looming. Foot and mouth is circling the area, tightening its grip; the landscape of the countryside is shifting and the nightjars, birds traditionally said to herald death, are in full song.

If at first verging on the stereotypical – Nigel Hastings as Jeffrey is all public school, excessive drinking and trivia questions, while David Fielder’s Michael is brimming with Devon burr and earthy cussedness – then one of the main joys of this beautifully observed play is to watch the friendship between the two men slowly unfold and mature. From the beginning, there is a mutual dependency, with Michael providing Jeffrey with refuge and Jeffrey tending to Michael’s herd before being called on to slaughter it. As time goes by, experiencing both the best and the worst of each other, with wives either deceased or divorced, each man gradually, movingly, becomes the other’s saviour.

The set created by Max Dorey is a small marvel; a barn full of so many worn and authentic details – from stalls and wooden crates to cobwebs in the rafters – that it could have been freshly plucked from the Devon countryside. And over the years it barely changes, despite Jeffrey’s attempts to persuade Michael of the value of modernising; going organic, building holiday homes or a conference centre to accommodate the Grand Designs crowd. Michael’s watchword is constancy; he was born on the farm and you feel his anger when all he holds dear – the earth and his animals – is in danger of being destroyed.

There are moments of pure pleasure, both in Paul Robinson’s direction which atmospherically recreates external events in falling incinerator ash and disco lights, and Roberts’ weaving of tragedy with hilariously acerbic one-liners; Jeffrey describing his wife as having “10 different lizard heads, all of which hate me” and Michael advising him to “eat before cider or the cider eats you”. Following her recent audio-visual piece Infinity Pool at the Tobacco Factory, this is a more conventionally-staged but equally compassionate portrayal from Roberts of characters finding their own muddled pathways through the maelstrom and minutiae of their lives.

Posted by Claire Thinking at 13:11

Email ThisBlogThis!Share to TwitterShare to FacebookShare to Pinterest
Labels: And Then Come The Nightjars, Bea Roberts, Bristol Old Vic