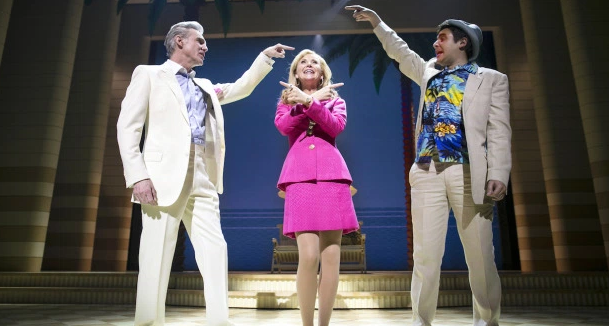 What you might lose in subtlety when dipping your toe into the water at Beaumont-Sur-Mer, you can more than make up for in comic, high-octane entertainment.

This fictional town on the French Riviera, backdrop for Dirty Rotten Scoundrels, is home to the suave and debonair British conman Lawrence Jameson. Each season it welcomes a host of wealthy women easily separated from their money – and Jameson, in league with chief of police Andre Thibault, is all too willing to relieve them of it. The story is largely faithful to the 1988 film starring Steve Martin and Michael Caine, but with their 2004 stage adaptation Jeffrey Lane and David Yasbek have gone one step further; heightening the escapism by turning it into a musical that has shades of Mel Brooks and The Producers.

Jameson’s comfortable existence is undermined by the arrival of a new pretender; an enthusiastic but shambolic young American, Freddy Benson. Relieved that Benson has helped him out of a spot of bother involving an Oklahoman blonde with a penchant for shopping and new husbands, Jameson agrees to teach him the tricks of the trade. Before we know it, the pair of them are battling it out to win the money and affection of the newest young heiress on the block, soap queen Christine Colgate.

Don’t expect light and shade here; there are stereotypes a plenty and no great variation in tempo – this is a show that starts off loud and ends up even louder. But, along the way, there is a great deal of fun to be had, as the conmen first work together and then compete – with increasingly sadistic tendencies – to outdo each other.

The chemistry between the two leads works well; Michael Praed embodies all the self-absorbed, silver fox charm of Jameson in a performance, which sometimes hints at Ralph Fiennes’ legendary concierge in The Grand Budapest Hotel, while Noel Sullivan’s Benson is crude, coarse, yet somehow loveable. Gary Wilmot, only recently at the Hippodrome in Oklahoma!, is completely at home once again as Thibault, the chief of police whose subplot involves lonely English tourist Muriel Eubanks (Geraldine Fitzgerald); their duet of Like Zis/Like Zat is a rare moment of endearing tenderness. And Carley Stenson, her singing voice powerful and pleasing in tone, exudes charm and innocence as Christine Colgate, one of the few characters who is more complicated than she at first seems.

There are gorgeous costumes and bucketfuls of glitz and glamour in Jerry Mitchell’s stylishly choreographed chorus numbers, plenty of comic asides and laugh-out-loud moments – let’s not even think about Ruprecht and his genital cuff – all played out within a bold, dynamic set. This is slick, fast-paced entertainment that may not push at the boundaries of the musical form, but is not afraid to send itself up and more than keeps the audience happy throughout.

Posted by Claire Thinking at 12:43