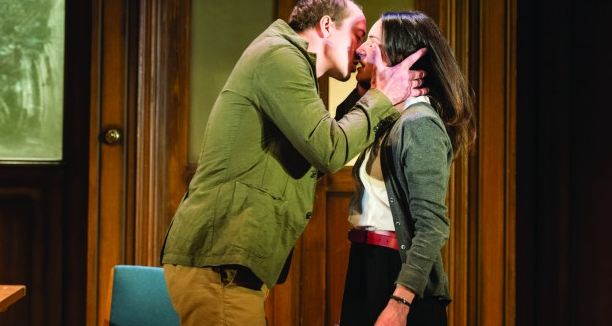 Headlong’s adaptation of George Orwell’s dystopian novel 1984 has enjoyed three West End runs and two tours prior to its arrival in Bath. So, those of us who’ve already read the book and perused the four and five-star reviews of the play may feel as though they know what they’re letting themselves in for. But Robert Icke and Duncan Macmillan’s production quickly batters down any hint of complacency, in a chilling 101 minutes where intense theatrical staging meets astounding Orwellian prescience.

From the outset, the use of Orwell’s appendix on the principles of Newspeak frames Winston Smith’s story in a different light; the piece opens with a book group discussion taking place sometime after 2050, praising the universality but questioning the authenticity of Winston’s diary. In a setting where the clocks already strike 13 – and, due to the number of times history has been revised, nobody is sure of the exact date anymore – both time and the truth take on a new and unaccustomed fluidity.

Matthew Spencer’s pallid and tentative Winston is lost in the world he inhabits. Simultaneously, it seems he is writing his diary of the present and being addressed by the futuristic book group. So where now does he really exist? His work at the Ministry of Truth carries on, “unpersoning” those who have dared to challenge the Party by deleting every trace of their existence and taking part in the regular “Two Minute Hates” against newly-decreed Party enemies.

Yet, afflicted by fragmented memories, Winston sets his course for a fight back. Against a background of continuous war with interchangeable enemies, he falls in love with Julia (Janine Harouni), a co-worker he previously suspected of being a member of the Thought Police. With her unprecedented access to chocolate, real coffee and a half-remembered memory of the refrain of Oranges and Lemons (one of the many motifs of the play), Julia brings with her echoes of the past – but also a foreshadowing of the future in the mantra she shares with Winston: “We are the dead”.

Chloe Lamford’s startling and ingeniously dynamic set design begins in the drab, haunted corridors of the Ministry of Truth, before a series of transformations brings overhead video projections onto a sterile, tiled backdrop, flashing images of Winston’s work and messages from Big Brother which include the destruction of deviant thought criminals. Enhanced by Natasha Chivers’ forensic lighting, Tom Gibbons’ dyspeptically precise sound and Tim Reid’s unsparing video, we witness the secret hideaway Winston shares with Julia at the back of an antiques shop and the ultimate terror of Room 101 – a place where Tim Dutton’s impenetrable O’Brien can casually brush away a forcibly-extracted stray tooth from a seat as if it were no more than a crumb.

The performances are outstanding; Spencer and Harouni are both fiery and tenderly convincing as the idealistically doomed lovers and Dutton coolly menacing as the man of the Inner Party. Headlong’s magnificently incisive version can be a harrowing watch and may not be for the faint-hearted, but it emphasises the astonishing relevance of Orwell’s surveillance state vision for our present and future – every bit as much as for our 20th Century past.

Posted by Claire Thinking at 14:35