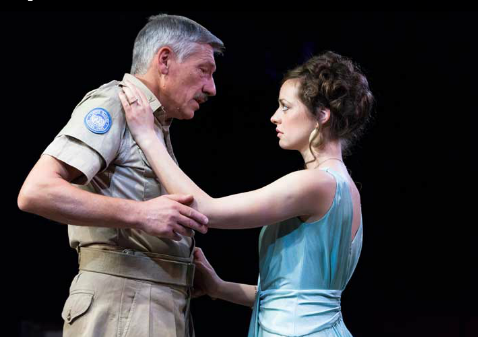 In this new production of Living Quarters, Andrew Hilton dusts off the play he first directed back in 1991 to reimagine a much-overlooked piece by one of our most significant living writers. Yet, being revived as an echo from the past feels particularly appropriate for Brian Friel’s 1977 work, dwelling as it does on memories and turning points; the “what if” moments we find ourselves replaying and contorting when they revolve around events of great consequence.

Living Quarters is based on Euripides’ tale of Theseus’ son Hippolytus, punished by a vengeful Aphrodite, who causes his stepmother, Phaedra, to fall in love with him. A story also retold by Racine and Eugene O’Neill, Friel locates it in his Irish heartlands; the fictional Ballybeg, a small community in County Donegal, where the Butler clan – three sisters, a brother and a young second wife – are convening at the family home to celebrate their soldier father and husband’s heroic return from conflict.

Perhaps one of the reasons for this play’s neglect is Friel’s insertion of an authoritative Greek chorus of one, simply known as “Sir” (played by Christopher Bianchi), who introduces himself as the omnipotent arbiter of the story. Sir audits the plot’s key flashback scenes by selecting them from his ledger, stripping away superfluous characters with a ruthlessness that belies his outward benevolence. It’s a difficult construct to get right; top-heavy and distancing until Sir’s role is fully established, Friel does gradually succeed in replacing the play’s subsequent loss of fluency with a meditation on the counterpoint of fate and individual responsibility.

Bianchi is the consummate master of ceremonies – steely, unruffled and wry – and Friel is already displaying his empathy for family dynamics in the tight-knit, conflicted Butler children, all unravelling in different ways since the loss of their mother. Nina Logue is world-weary as the eldest, Helen, on a flying visit from her new life in London, while Hayley Doherty is all domestic chatter as Miriam, the sister who settled down in the village. Martha Seignior brings eagerness and naiveté as Tina, the youngest, and Craig Fuller is woefully, passionately lost as black-sheep brother Ben, instrumental in the tragedy about to unfold.

Meanwhile, Rose O’Loughlin portrays the cuckoo in the nest; smouldering young second wife Anna, lonely and vulnerable in the quiet backwater, adored and overlooked by her self-absorbed Commandant husband (Simon Armstrong) and the others in turn – although the latent chemistry, which must once have existed between her and both Butler males, is difficult to discern.

All of Friel’s trademark ingredients are here – the layers of family strife, tumbling cadences of exquisite prose, empathy, wit and immersion in a particular moment – and, with Hilton’s usual pared-back clarity, this joint production from Tobacco Factory Theatres and Shakespeare at the Tobacco Factory makes the most of them. The cast heightens the tension with some spell-binding performances that are convincing in their regret and remorse. But, while Living Quarters certainly deserves more of an airing than it has seen in past decades, it has a sometimes tentative and uneven structure, with a much stronger second half than first. Principally, as Harper Lee’s Go Set a Watchman does for To Kill a Mockingbird it serves as an interesting exploration of the sources and themes found in Friel’s later, iconic works such as Faith Healer, Translations and Dancing at Lughnasa; seen through this prism, Living Quarters is still exceedingly watchable.

Posted by Claire Thinking at 12:19