After tackling the dictatorship of the professional kitchen in his Costa shortlisted debut Chop Chop, Simon Wroe sets his sights on a different sort of tyranny. Here Comes Trouble, his second novel, explores abuse of power on a state-sponsored scale in the fictitious crackpot nation of Kyrzbekistan. A toxic mix of Russian oligarchs, hamstrung press and far-right populism makes this a parable for our turbulent times. But it's also a coming of age tale that combines hormonal confusion with acerbic observation, conjuring up a darkly humorous world brimful of cataclysmic absurdity. 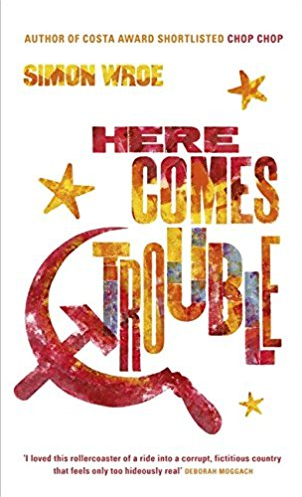 Expelled from school for an act of rule breaking, 16-year-old Ellis Dau is sent to work at the Chronicle. His father Cornelius is editor of this last remaining remnant of a free press, overseeing a crew of squabbling reporters and unbowed in his determination to speak truth to power. Not that Ellis is initially all that impressed:


Journalism, as far as he was concerned, was a lot of people making a big deal out of stuff that wasn't a big deal. That, or they squashed an actual big deal into a small space, or said the big deal was exactly this or that, or claimed they were experts on the big deal with the absolute definitive take when they'd first heard about it five minutes ago. Or they used the big deal to flog their own hobby horses because when you thought about it wasn't this what the big deal was actually about. And all the while, in every instance, they pretended the big deal was not chaotic and constantly changing but fixed and orderly, which was never true or in any way the case.

Ellis' interests consist of gaining underage access to the Chicago Pub with his best mate Vincent and trailing round after Joan, the beautiful daughter of a local business magnate. But a brick through the office window, with a cryptic misspelled message wrapped around it, wakes him from his teenage solipsism; the newspaper and all it represents is under threat. Now it's down to Ellis to make a stand and, with the narrative written from his perspective, he proves to be an endearing, doubt-filled protagonist.

Here Comes Trouble is based on Wroe's experiences in accompanying reporters for the online news site kloop.kg on their stories. He may take on the serious misuse of power, but isn't afraid to poke fun at the ludicrous logic of its perpetrators. Corrupt law enforcers spout their own crazy reasons why free speech is the real enemy of the people and even the shocking spectacle of a summary execution is delivered with a sideswipe of farce.

The far right nationalist Horsemen movement is lethal and inept in equal measure:

An acned henchman stepped forward, tricolour flag in his hands. 'Take this, Russians', he said.

Grotz, seeing Rolo falter, told him, 'Don't listen to her. Ignore this negative thinking. Be the bigger person.'

Rolo lit one corner and the flag went up.

'See how foreigners are?' Grotz asked his men. 'It's always someone else's fault. "That's not our flag." They could have just gone along with it. Didn't have to be so difficult about it.'

One misstep is that - as in Chop Chop - the few female characters, particularly Joan, feel underwritten. But there's a particular catharsis in laughing at events too close for comfort and Here Comes Trouble provides this in spades; a feel-good apocalypse for our times.


Here Comes Trouble is published in hardback by Weidenfeld & Nicolson. Many thanks to the publishers for my review copy.
Posted by Claire Thinking at 17:32