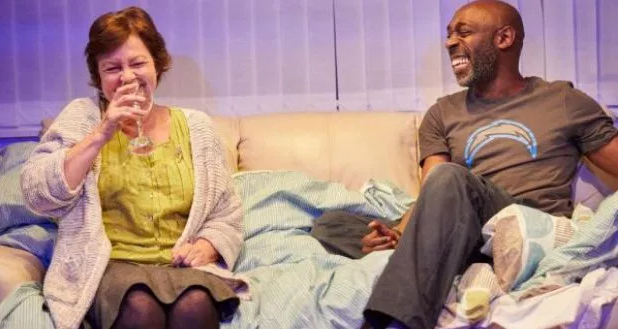 A typical suburban living room in Havant plays host to Barney Norris’s latest excursion into the lives of the lonely and unfulfilled. Carol and Eddie were lovers many years ago and meeting up again, seemingly by chance, she takes him in; no small gesture for Carol, whose existence has become contained. She has remained in one place, ‘hefted like sheep’ to her surroundings, while Eddie has drifted – to Nigeria and back again. She has a broken marriage and a daughter too busy to talk to her or visit; his whole life is packed up in a few supermarket carrier bags. There’s so much pain etched under the surface of both lives, at times it’s hard to look.

This is Norris’s heartland. He’s already been recognised for the success of his previous plays with theatre company Up In Arms; Eventide toured to great acclaim to the Tobacco Factory’s Brewery Theatre in 2015. He’s recently published his first novel Five Rivers Met on a Wooded Plain, exploring intersecting lives in the aftermath of a car crash in Salisbury. Now While We’re Here, delicately directed by Alice Hamilton, once again examines the minutiae of humdrum lives; two characters trapped like rabbits in the headlights of previous hurt and disappointments. Awkward and uncertain but finding a spark still exists between them, they begin to circle tentatively around where this might lead – if only they could let it.

It’s a relationship played out with studied and detailed tenderness by the two actors. Tessa Peake-Jones portrays Carol’s every fleeting emotion with naturalistic clarity, her compassion for Eddie’s plight and desire to reach out curtailed by the instinct to protect herself. She’s been hurt by relationships before, particularly this one: “I know where I am on my own,” she declares.

Andrew French as Eddie still has glimmers of the charismatic swagger he must have carried as a young man, a façade that peels away in crucial moments to reveal the torment beneath. He’s worn down by the burden of never having belonged; a black child fostered by white parents, always searching for his roots, denied the care he needs by a tick-box NHS system he never really fitted.

While We’re Here is an intensely character-driven, intimately drawn play that encompasses all the nuances of everyday existence. In the larger Factory Theatre, it does feel as though it loses some of the potency of a small studio space; the audience is observing the minuscule shifts in Carol’s relationship with Eddie at a distance, as if through glass, rather than taking a seat in her living room. If it doesn’t quite reach the heights of Eventide, then this is still another Up In Arms production (co-produced with the Bush Theatre and Farnham Maltings) of rare empathy, the play’s deceptively simple, heart-wrenching ending emphasising the quiet drama of the human condition.

Posted by Claire Thinking at 11:52