There may be no shortage of blockbuster psychological thrillers around at the moment, but - let's face it - they're not always all that well written. Many rely not so much on plot twists as complete reversals of fortune to keep readers turning the pages. It may work in the short-term, but feels manipulative and ends up distancing the story from any contact with reality.

Of course, there are exceptions and I'd count among those Liz Nugent's gripping Unravelling Oliver and Lying in Wait, as well as Amanda Jennings' tenderly affecting In Her Wake. And now there's another title to add to this list of exceptional domestic noir: Exquisite, the debut thriller from Sarah Stovell. 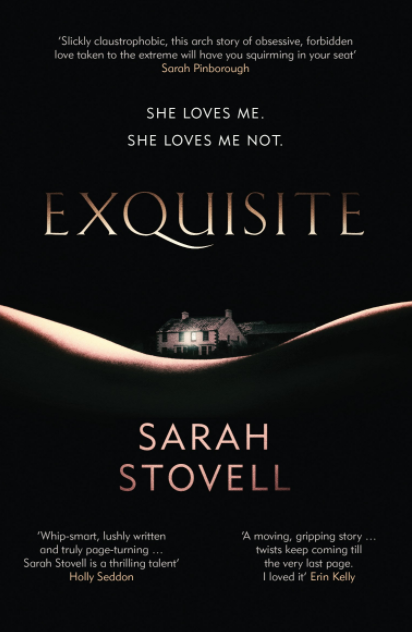 The story revolves around two women: Bo Luxton, best-selling author with a family and home in the Lake District and 25-year-old Alice Dark, a talented young drifter with a first class degree in English Literature and a dead-end boyfriend. They meet at a writers' retreat in Northumberland; Bo is teaching and Alice is the most promising of her students, reminding Bo of her younger self. During the week, Bo takes Alice under her wing, leaving the starstruck Alice with a dread of returning home to Brighton:


This train was the hinge between the creative, seductive week I'd just had and the life I was going back to. Already I could feel my spirits starting to sag. Jake the Waster was waiting for me, half-drunk on Special Brew, his clothes unwashed, tobacco down his trousers. I wasn't sure I could bear it.

A flood of emails builds intensity. Bo invites Alice to stay with her. After the visit it's clear their friendship is tipping into obsession:


Upstairs the spare room stood empty and bare, nothing left of Alice save the wrinkle of an untidy bedspread. I took the duvet cover off and started a wash pile in the middle of the room. I could smell her in the bed linen - the warm, broken and beautiful heart of her, ingrained in the fibres. And I couldn't help myself: I stood and stared at the empty space on the mattress, knowing her imprint would be fixed in the memory foam below; and then I climbed into the bed, curled up and wept.

The women take turns to narrate sections of the book; though there are twists, Stovell's novel is primarily an examination of their increasingly sinister relationship. Has their closeness cascaded into a life-changing affair? Who is telling the truth and whose writing the fiction of an unreliable narrator? Their versions of events vary ever more markedly as the story unfolds, only fusing in their recollection of one single, memorable night.

Bo previously had a stalker, which means her husband opens all the post and reads her emails, but it's unclear whether she was really a victim or the puppeteer pulling the strings. Both women have shadows in their past; unreliable mothers, broken relationships, failed attempts to settle down. It's what draws them together and ultimately threatens to tear them apart. Stovell keeps her readers guessing to the end; each section begins with a narrative from a women's prison in Yorkshire, but it's impossible to discern whether the words belong to Alice or Bo.

Exquisite is a well-constructed psychological novel with flawed but believable characters. There's never any sense of being short-changed; I found myself devouring Stovell's intriguing, incisive prose in a couple of sittings. It's a compelling debut thriller from a creative writing lecturer who has obviously put her own teaching to good use.

Exquisite is published in paperback in the UK by Orenda Books on 30 June 2017. Many thanks to Karen and Anne at Orenda for my review copy.
Posted by Claire Thinking at 12:50