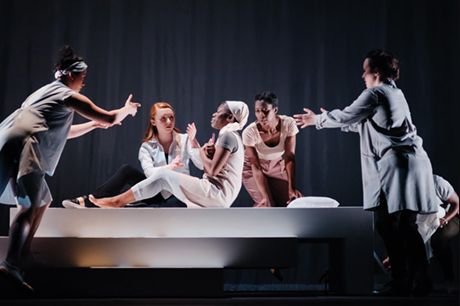 Of the many interpretations of the classical Greek myth of Medea, only Euripides’ version has survived in full. A woman driven to extremes, delivering the ultimate act of vengeance on the man who betrayed her for another, and consequently demonised as an unnatural she-devil.

George Mann, director of Bristol Old Vic’s bold new all-female staging, seeks an alternative portrayal. His vision is of a woman who rises above the wrongs heaped on her by her husband; seeking justice but, above all, equality. To relate this to a modern audience, Mann’s production intertwines Medea’s ancient story with a contemporary tale of newly single mum Maddy, written by Chino Odimba.

While Maddy’s story of her bullying ex-army husband Jack’s affair begins in spoken word, the lines from Euripides are sung, power-ballad style, in a musical fusion co-composed by the company and Jon Nicholls. African influences permeate the Greek. Performed by a young company of six, this sounds like it shouldn’t work but, on balance, it does. The frame story may be a little crudely grafted onto the classical tale at times, but as the twin narratives progress there’s an increasing fluidity bridging old and new.

In large part this is due to a magnificent central performance from Akiya Henry, as both down-trodden Maddy from Gloucester, drawing strength from a discovered copy of the translated text, and the wrathful Medea. Henry embodies both vulnerability and regal power in equal measure, seamlessly portraying the transformation between the two. Stephanie Levi-John as Jack and Medea’s husband Jason struts the stage full of bombast and blather, and there’s strong support from the committed chorus – Michelle Fox, Eleanor Jackson, Kezrena James and Jessica Temple – creating rainfall with finger-clicks and chanting unearthly acapella harmonies as they switch between characters.

Shizuka Hariu’s glossy white set builds ingeniously through the piece, from minimalist bed to towering stairway, in line with Medea’s transcendence. In the second half, the question of the story’s resolution looms large. Will Maddy’s revenge embody the violence of Medea’s wrath? The potential for anti-climax is huge and it’s all credit to the company that, with the dizzying heights of Mount Olympus and a final lingering chorus, there comes a palpable sense of justice being soundly delivered.

Mann’s Medea may not quite possess the clarity and dynamic physicality of his previous Bristol Old Vic work Pink Mist, but what emerges here is a tantalising, occasionally frustrating but more frequently illuminating hybrid of stories and styles, that brings an original focus and feminist resilience to a classical tale of retribution.

Posted by Claire Thinking at 13:06