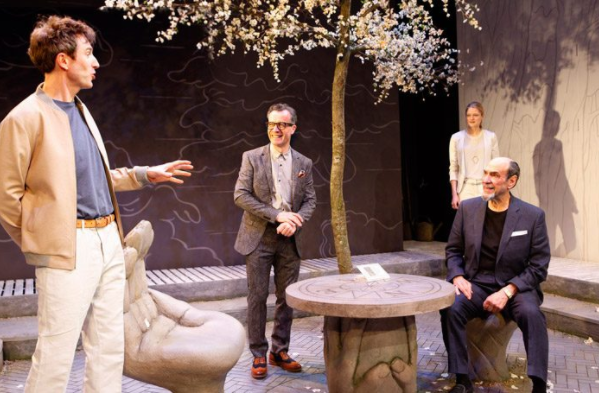 The Ustinov Studio, under artistic director Laurence Boswell, has garnered a well-deserved reputation for unearthing significant international works to present to a British audience – and then attracting top-flight actors to appear in them. Productions like The Father, with Kenneth Cranham in the lead role, have transferred to London’s West End and beyond. And yet, there’s still been a noticeable buzz, in anticipation of Academy Award Winner F Murray Abraham’s appearance in Daniel Kehlmann’s comedy The Mentor.

Kehlmann is a literary phenomenon in Germany, particularly renowned for his novel Die Vermessung der Welt (Measuring the World), but this is the first time one of his plays, translated with a sure and light touch by Christopher Hampton, has been performed outside his native land.

Abraham plays Benjamin Rubin, an embittered writer who presented his seminal work to the world aged 24 – and has been in slow decline ever since. Having dabbled in novels and screenplays to cover the cost of homes and ex-wives, he’s now accepted the fee of 10,000 Euros from a cultural foundation to mentor young prodigy Martin Wegner (Daniel Weyman). But, from the outset, this isn’t a harmonious relationship; Rubin swiftly discovers his mentee, described as ‘the voice of his generation’, far from feeling honoured, is being paid at the same rate.

Unlike his character, Abraham’s portrayal comes from an artist at the top of his game; full of depth and nuance with the subtlest of comic delivery. Rubin heaps demands – more pillows, Speyside malt, no television – on the foundation’s representative Erwin Rudicek (Jonathan Cullen) as though he were a waiter, before demolishing the basis of Wegner’s work and setting his sights on the writer’s successful art historian wife, Gina (Naomi Frederick).

Abraham’s performance is matched by the rest of the cast, with Weyman and Frederick the epitome of a golden young couple – all light colours and chic accessories, in contrast with Rubin’s wardrobe of black – until Rubin throws a critical grenade in their path and uncovers the fault lines beneath the smooth exterior. Cullen’s Rudicek is a painfully convincing exploration of compromise, as a failed artist turned administrator, whose heart lies elsewhere.

Polly Sullivan’s light and shade design suggests a bucolic retreat, complete with flowering blossom, but the insistent chorus of frogs in the pond is an early indication that this is far from a haven of tranquillity.

There are obvious comparisons with Abraham’s film role as Salieri in Amadeus, although it’s unclear whether Wegner’s talent soars anywhere close to the genius of Mozart or is nothing more than pretentious drivel. As with Plastic, first play in the Ustinov’s season, The Mentor raises questions of life, art and ego; who sits as judge over artistic value in any endeavour? How much comes down to self-belief? At one stage, Gina tells her crestfallen husband, ‘even if he’s right, he won’t stay right’.

Of the two plays, it’s Plastic that examines the subject with greater complexity, but there are witty layers of challenging ambiguity to savour in The Mentor, too; does Wegner ever go on to award-winning heights, or is this, like so much, an illusion? Discover for yourself in this second accomplished and unmissable work in the Ustinov’s outstanding 2017 German season.

Posted by Claire Thinking at 11:51